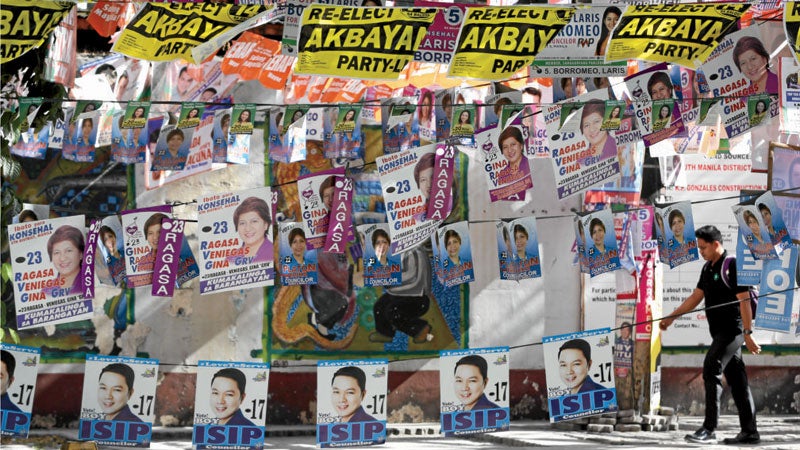 THE ENTRANCE to Araullo High School on Taft Avenue in Ermita, Manila, is all but covered in campaign posters on the eve of the May 9 national elections. NIÑO JESUS ORBETA

A day before the national elections, the Metropolitan Manila Development Authority (MMDA) announced that it had confiscated 43 truckloads or 154.78 cubic meters of illegally posted campaign materials from all over Metro Manila.

The haul which dates back to the start of the campaign period on Feb. 9 is stored at the agency’s facility under the Santolan flyover in Quezon City.

The MMDA earlier donated 1,000 kilos of candidates’ tarpaulins to environmental watch group, EcoWaste Coalition, and the church-based organization Babuyan Islands Missions, which recycled these into bags, school supplies and other useful items.

MMDA “Oplan Baklas” team leader Francis Martinez said that there was a significant increase in the amount of campaign materials collected this year compared to their haul in the 2013 elections. He added that the bulk of their yield consisted of posters of local candidates.

According to Martinez, most of the seized election materials came from Manila. He failed to give a figure although he noted that a lot of school officials in the city had complained about the posters put up on gates and fences.

In fact, at the Maximo Hizon Elementary School in Tondo, Manila, the posters have covered the entrance, he added.

“As of now, we have 43 truckloads collected but let’s wait until the full-blast operation on Tuesday,” Martinez said, noting that he expected the number to increase a day after the elections.

Based on the Fair Elections Act or Republic Act No. 9006, poster areas exceeding 12 ft. by 16 ft. and posters measuring 2 ft. by 3 ft. will be taken down by MMDA personnel.

“They are hesitant because they know that it will cost them a lot. Once they put their campaign materials in the illegal zone, it will be removed by the MMDA eventually,” Tuazon added. With Angelica Cruz