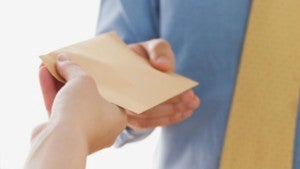 CAMP GEN. ALEJO SANTOS, Bulacan — The police arrested seven people who were implicated in vote buying in the towns of Marilao and Guiguinto towns, allegedly on behalf of Bulacan candidates in the May 9 polls.

Five Guiguinto residents were caught with envelopes filled with cash as they exited the compound of a mayoral candidate at 2 p.m. on Sunday, said Senior Supt. Romeo Caramat Jr., Bulacan police director, during a Sunday news conference.

Caramat displayed P16,000 tucked in small brown envelopes, which were seized from the suspects.

Supt. Julius Caesar Domingo, Guiguinto chief of police, said an informant led them to the suspects.

In Marilao town, Supt. Amado Mendoza, the town’s chief of police, announced the arrest on Saturday night, of Melinda Ventura and village watchman Jesus Dela Cruz also for vote buying, on behalf of a gubernatorial candidate. Police seized from them P20,000 in cash.