The vice presidential race has been almost as exciting and controversial as the contest for the highest position in the land. Candidates bickered and engaged each other in word wars.

In the run-up to Monday’s elections, INQUIRER.net held a series of Facebook Live interviews with candidates for the vice presidency, in an attempt to learn more about their vision for the country and what drives them to run for public office.

While old issues were discussed, the candidates also revealed to us several things — some surprising, others informative — that are not often tackled or highlighted in their interviews.

(INQUIRER.net scheduled an interview with Senator Francis “Chiz” Escudero but it was canceled because he was not feeling well, while Senator Gregorio “Gringo” Honasan was not able to give us his preferred date.)

1. Marcos says he’s a ‘pauper’ compared to other politicians 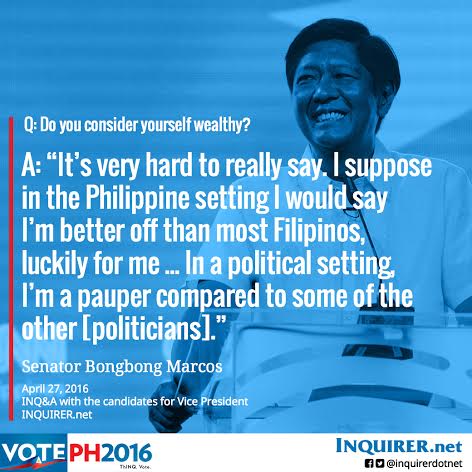 Amid the accusations of ill-gotten wealth during his father’s 21-year presidency, Marcos claimed that he is a “pauper” or a poor man when compared to other politicians.

Asked if he considers himself wealthy, he said, “I suppose in the Philippine setting, I would say that I am better off than most Filipinos, luckily of me. But where does my money come from? We are a very modern couple, my wife and I. She makes the money, I spend it.”

READ: ‘I’m a pauper compared to other pols’

“We’ve been lucky being able to recover some of the assets that were mine to begin with,” he said, referring to contested assets.

Marcos then added, “In a political setting, I’m a pauper compared to some of the others. There are some vice presidential candidates that are spending 15 million pesos a day. That kind of level of expenditure I cannot even begin to approach.”

Professional estimates of the amount the Marcos family amassed while they were in power peaked at $10 billion. Less than 50 percent of that has been recovered by the state.

2. Robredo won’t stay in the Coconut Palace if she wins 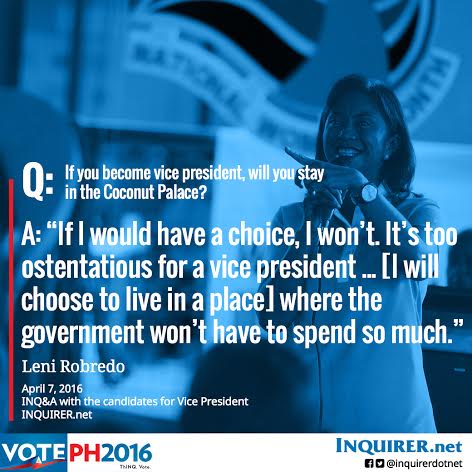 Coconut Palace will no longer be the official residence of the vice president of the Philippines if Robredo wins on Monday.

The widow of Jesse Robredo said she felt that the place was “too ostentatious” for her.

She said she doesn’t want the government to spend so much for her office.

Robredo said it would be “ironic” for her to stay at the Coconut Palace as she vows to be “one with the people.”

The Coconut Palace, which cost the government P37 million, was built in 1978 as the official guesthouse of the late president Ferdinand Marcos. It is now owned by the Government Service Insurance System (GSIS), which earns P440,000 monthly from the vice president’s use of the place. With a report from Julliane Love de Jesus

3. Cayetano changed his mind about the presidency after working with Duterte

Cayetano admitted that while he initially planned to run for president, working with tough-talking Davao City Mayor Rodrigo Duterte made him look at things with a different perspective.

“The Duterte campaign changed me a lot. I really see that change can happen right away,” said Cayetano, who vowed to support Duterte’s presidency even if he himself loses.

However, Cayetano said that while he has no plans to run for president in the near future, his plans might change later.

During the vice presidential debate in the University of Santo Tomas, he answered “or” when the candidates where asked to answer “yes” or “no” if they had plans to run for president.

4. Trillanes was hurt most when he was accused of corruption while in jail, after his son died

Trillanes has often been portrayed as a military man, unfazed by the accusations hurled against him but during our interview, the senator admitted that he was hurt most when he was accused of corruption while he was in jail for the Oakwood Mutiny.

He said the cases filed against them, which he said were fabricated, were eventually dismissed.

His son, Alan Andrew, died 21 days after being born. Because he was in jail, Trillanes was unable to visit the baby in the hospital. Reports said the baby had acquired pneumonia with primary complex.

By the time Trillanes was temporarily released from detention, his son had already died.

5. Marcos feared not being able to return to the Philippines

“What was going through your head when your family was being moved from Malacañang to Hawaii?” INQUIRER.net editor in chief John Nery asked the son of the late Ferdinand Marcos.

Bongbong, who was 28 when his family had to leave the Philippines after Edsa People Power, said he thought only of one thing.

Marcos recalled how the US military first took them to Clark Air Base and then to Guam.

He said he was sitting next to his godfather, businessman Danding Cojuangco, on the plane.

“That was immediately my concern. They’re taking us away from the Philippines. ‘Will we ever be able to come back?’ That’s exactly I was thinking,” Marcos said.

6. Robredo sneaks off for an hour during her sorties

Robredo, who has repeatedly emphasized the need to serve the marginalized sectors of society, said her most memorable experiences in the campaign trail is when she leaves the sortie to be with them.

The congresswoman said that when she visited Pampanga, she went up to Mount Pinatubo without media.

She said she also spent an hour with different tribes in Bukidnon.

“I’m just giving myself a sense of parang balance. Kasi ‘yung sorties talaga while you’re enjoying being with people, ano siya eh, parang sometimes, it becomes mechanical. Na you jump from one sortie to another,” she explained.

“Without media, without anyone else, pero parang food for my soul ‘yun. Eto yung nageenergize sa akin,” Robredo said.

7. Cayetano likens him and Duterte to two different “evangelists”

Cayetano only had good things to say about Duterte. Asked how he reconciles his Bible-quoting image to that of the foul-mouthed mayor, he said there are “two kinds of evangelists.” He likened Duterte to Jimmy Swaggart, a controversial American evangelist.

The senator said that when he was young, he asked his mom why there are people like Swaggart who condemned sinners and others who were more merciful like the father of the Hubbard Family.

“Sabi niya, ‘The reality is some people need to be slapped in the face to realize that they are doing a mistake. And some people they’ve been slapped their whole life and they need to be hugged,’” Cayetano recalled.

“That’s why, you have two kinds of evangelists and that’s what I saw in Mayor Duterte,” he said, adding that they have the same core values and deep belief in God.

“He has a deep belief in God… In his heart, he knows why we are here on earth eh. What we’re supposed to do,” Cayetano said.

“Put it this way, pwede namang magsama sa isang simbahan ang Opus Dei and Jesuit eh. They believe in the same God. Yung isa conservative, yung isa medyo liberal,” he explained. “I’m not saying na pareho kami ng belief ni Mayor Duterte. I’m not saying that I’m a better Christian, but that’s not for us to judge. Core values and how we want to save the country. Nagkakaisa kami and I’m comfortable with that.”