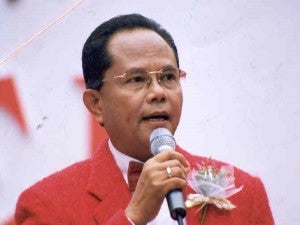 MANILA — Catholic charismatic group El Shaddai has distributed to its members a sample ballot bearing the names of candidates “it will support” for Monday’s elections.

Willy Villarama, former secretary general of Buhay partylist and Velarde’s political adviser, explained that all the names appeared on the sample ballots because during the mock elections they conducted, all candidates got votes.

“So it’s just up to the members to choose who among the five candidates they will support,” Villarama said.

However, the font of Binay and Roxas’ names appeared to be bigger than those of three other presidential candidates.

“Sa printing lang siguro yan. Otherwise, kung may isa o dalawa lang na napiling suportahan, bakit ilalagay pa yung iba, di ba? (Maybe, that’s just the effect of printing.  Otherwise, if only one or two were being endorsed, then why would we bother to put the names of the others?),” he explained.

Only the name of Sen. Ferdinand Marcos Jr. was written on the space allotted for vice president in the sample ballot.

“That’s because he got 95 percent of the votes, almost unanimous,” said Villarama.

This means that Marcos will get the endorsement of Velarde, according to Villarama.

He said the list is expected to be read by Velarde on Saturday during the group’s prayer vigil in Parañaque City.

In the partylist race, the group is supporting Buhay, which was founded by Velarde.

Last Tuesday, Velarde told his flock that he would announce the names of candidates he would be supporting for the 2016 national polls on Saturday.

“Walang sinabing maganda ang mga kandidato sa kampanya kaya wala pa ko napipili (The candidates did not say anything good during the campaign so I did not pick anybody),” he said, adding that he would release the result of the survey they conducted among members of his flock, along with his own choices, on Saturday.

“Hindi ko kayo sasaklawan sa karapatan nyong mamili, mamimili din ako at sasabihin ko yan sa inyo sa Sabado (I will not impose on you right to choose.  I, too, will choose and I will bare my choices on Saturday),” he added.

The five presidential candidates went to the El Shaddai’s prayer vigil last Saturday in a bid to get Velarde’s endorsement. But the most coveted endorsement did not happen because Velarde said they were sill awaiting the result of the survey they conducted among the El Shaddai members.  SFM