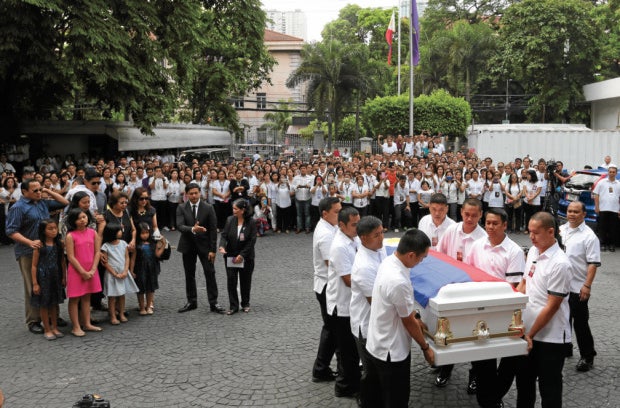 THE WAR for judicial independence is not yet over.

Returning to an institution her husband so painfully left four years ago, the widow of the late Chief Justice Renato Corona had such fighting words, describing his 2012 impeachment and conviction  as “unconstitutional” and an “injustice.”

In a thinly veiled rebuke of the administration, Cristina described her husband’s impeachment as a war more violent than armed conflict, one where the disgraced former chief magistrate had found himself in the frontlines.

“It has been five years since the war on judicial independence began. I do not hesitate to call it that. For what is a war but a state of open and declared armed conflict,” said Mrs. Corona in her emotional remarks at the necrological services held in her late husband’s honor at the Supreme Court yesterday.

“Instead of guns and bombs, overwhelming government machinery was used with tools that were in a way deadlier and far more effective, which permeate not just the body but the hearts of minds,” she said, clutching a hanky as she spoke.

She called for public vigilance, saying the fate that her husband had met shall not be allowed to befall another.

“If we find ourselves in another test of courage, you have either the will to defend judicial independence or crumble in the face of opponents both masked and unmasked,” Corona said.

In an apparent swipe at her husband’s accusers, she said democracy does not depend on “what any branch of government or public official dictates it to be.”

“In the name of the Filipino people and truest meaning of a democracy, continue to fight for the judiciary, continue the fight for judicial independence,” Corona said, her voice louder for emphasis.

Clad in black, she called her husband’s ouster a battle of perceptions, one that he ultimately lost.

“In this battle for truth and freedom, Chief Justice Rene was at the frontline, and in his wake he became the first casualty,” said Corona, her voice breaking.

Corona was removed from the high court in May 2012, barely two years since his appointment, after he was found guilty of underdeclaring his net worth. He was the first chief justice in history to ever be impeached.

Known to have long suffered from diabetes, Corona died of a heart attack on April 29 at 67, barely four years since he reluctantly left the high court.

Even before impeachment proceedings against the magistrate began, the administration had already made apparent its displeasure over Corona’s 11th-hour appointment just after the elections in 2010, when President Aquino was already the presumed winner.

Breaking tradition, Mr. Aquino chose to take his oath before Associate Justice Conchita Carpio Morales, instead of Corona, on June 30, 2010.

Cheered by supportive court employees during his departure from the court in 2012, the late magistrate was brought back to a mourning court yesterday morning, a Philippine flag draped on his coffin.