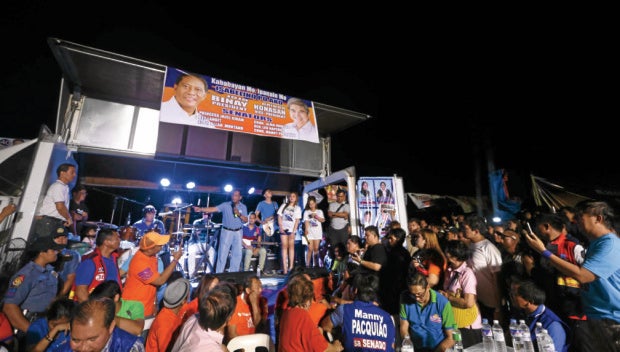 This is the message that the camp of Vice President Jejomar Binay has for Davao City Mayor Rodrigo “Digong” Duterte, who holds a commanding lead in the voter preference polls for the presidential election with only three days left before the vote.

The United Nationalist Alliance (UNA) yesterday said it was confident Binay would again pull off a come-from-behind win on Monday.

“History will indeed repeat itself,” said Binay’s spokesperson for political affairs Rico Quicho, referring to Binay’s 2010 vice presidential victory that was not heralded by the polls.

“To the other candidates: Do not celebrate yet, good things are about to happen, Binay is coming,” Quicho said, tweaking Duterte’s campaign slogan “Change is coming.”

Binay flamed out in January, after a brief spark lit by the predicament of Sen. Grace Poe, whose citizenship and residency had been challenged in the Commission on Elections and the Supreme Court.

But Poe fought back hard and climbed right back to the top after the Supreme Court cleared the way for her to run for Malacañang, dumping Binay to second place.

He didn’t stay there for long.  Duterte, capturing the imagination of voters with his controversial style, worked his way up from fourth place, climbing all over President Aquino’s chosen candidate Mar Roxas then Poe and seized the lead.

Binay is now fourth in the rankings, behind Roxas and Poe, and ahead only of Sen. Miriam Defensor Santiago, who has been bringing up the rear since the start of the campaign.

According to Quicho, however, the polls do not take into account “the intense ground campaigning” by the Vice President, including recent motorcades, house-to-house calls and sectoral events across the country.

But Duterte appears sure to leave his rivals eating his dust, with the bloc-voting, homegrown Christian sect Iglesia ni Cristo (INC) picking him as its presidential candidate.

INC has an estimated following of 2.25 million, whom the sect’s executive minister, Eduardo Manalo, exhorted to vote as one during worship service on Wednesday night.

Duterte should indeed celebrate, but he was quiet yesterday about his good luck. His camp issued a statement, though, welcoming the endorsement as a boost to his campaign.

Binay couldn’t care less, if his camp is to be believed.

UNA president Toby Tiangco yesterday predicted the run-up to Monday’s election would see “incalculable twists and turns.” He described the presidential contest as a “tight race.”

“We know that there is no easy path to victory, but the ground game will spell the difference,” Tiangco said.

“Vice President Jejomar Binay is determined to recapture the spirit of collective activism, and will continue to fight on behalf of the Filipino people for social justice and respect for human rights,” he added.

Binay himself told reporters in Cauayan, Isabela, that he was keeping his “running scared” attitude, that is, he was not being overconfident and would not be to the last minute of the campaign.

Asked by reporters what he thought of the hidden wealth charges thrown at Duterte by Sen. Antonio Trillanes IV, a vice presidential candidate, Binay taunted the front-runner, saying the Davao City mayor was accusing him of corruption when he was “guilty” of corruption himself.

“What’s unfortunate for him is that these accusations against him—and they seemed to be true but in my case it’s farthest from the truth from the very start—here there are documents and that will be hard to evade. These are matters of fact, not fiction,” Binay said. With a report from Christine O. Avendaño