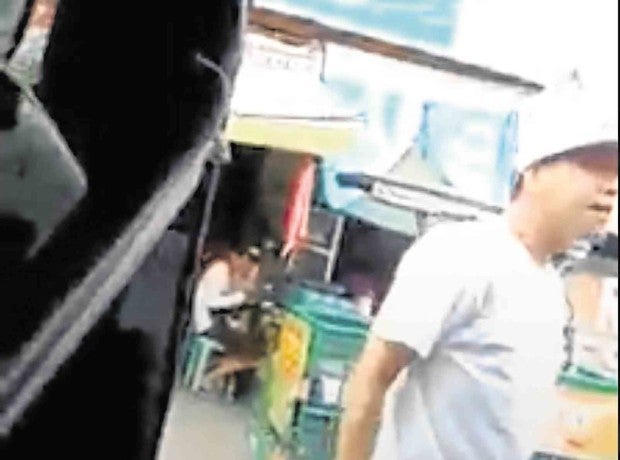 THREE videos recording John Michael Musni’s expletive-riddled rant against Johanna Mangubat Balen, reducing her to tears, have since gone viral after being uploaded on Facebook. The police have urged Balen, whom Musni also punched in the shoulder, to file charges against him. VIDEOGRAB/SOY GONZALES

The man who was caught on video swearing at and hitting a female passenger inside a passenger van had been identified by the victim’s coworker through his hospital records.

Supt. Alex Alberto, commander of the Fairview police station, said on Thursday they could no longer arrest Musni since the reglementary period had already passed. “He might have committed other misdeeds and other complainants could surface,” he added.

According to Alberto, the police verified Musni’s identity by going to his listed address in North Olympus, Barangay Kaligayahan, Quezon City, on Wednesday.

The incident involving Musni and Balen that was caught on video and uploaded on Facebook happened at 12:40 p.m. on Tuesday inside a UV Express bound for Caloocan City.

According to Soy Gonzales, the Facebook user who posted three videos of the incident, a couple hailed the van at Nova Stop, with the man shouting at Balen when she did not move from her seat near the door.

Gonzales narrated on her Facebook page that when Balen reasoned out that she was about to get off at Olympus, the man, later identified as Musni, shot back that it was their stop, too.

While inside the van, Musni repeatedly cursed and threatened Balen, Gonzales said. “Manahimik ka! Isa pang salita mo. Akala mo hindi ako papatol sa babae (Shut up! Not another word from you. I won’t back down just because you’re a girl),” he said.

When he got off, Musni threw a punch which hit Balen on the shoulder, said Gonzales who was discreetly recording the exchange. The punch was not caught on video.

Balen’s coworker, however, recognized Musni who once sought treatment at the hospital, resulting in his identification.