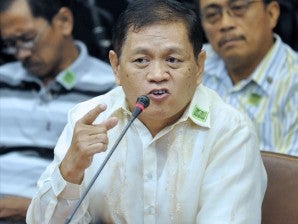 But for the cheating, Fernando Poe Jr. would have won the 2004 presidential race.

“Kung walang dayaan, malayong-malayo ang panalo ni FPJ, Fernando Poe Jr.,”  Moner said during the joint Senate committee hearing into alleged cheating in the 2004 and 2007 elections. “He would have won by at least one million [votes] just in the areas where I [operated].”

Based on the official results from the Commission on Elections (Comelec), Arroyo, now a Pampanga representative, lost in Tawi-Tawi and Cotabato City.

But Moner said: “[T]hey still shaved the votes for FPJ. Like in Cotabato City, he won big but the votes were reduced in the official count. The same with Tawi-Tawi. That was as far as we had witnessed.”

Former Lanao del Sur Election Supervisor Rey Sumalipao also said that when confronted with certificates of canvass (CoCs) showing zero votes for Poe, he chose not to examine these just so the votes could be canvassed without delay.

Moner said his operation received an P8-million budget made available by Malacañang through his “handler,” Alfonso Cusi, then general manager of the Philippine Ports Authority.

“I was made to understand that our group was the last line of defense,” he said, suggesting that other operators were working to ensure Arroyo’s victory elsewhere in Mindanao. “I [was] not the main force. Like in Marawi [and] Sulu, somebody was doing it already.”

Senate Minority Leader Alan Peter Cayetano noted that the purported budget covered only six provinces and a city. He said it pointed to the “enormity” of the amount that went around for election fraud.

“Question is, where did they get the money?” Cayetano said. 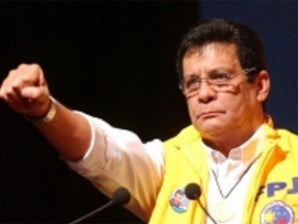 But Cusi flatly denied Moner’s statements. It was said that Moner—on instructions from Arroyo’s husband, Jose Miguel Arroyo, through Cusi—had bribed election officials to ensure the then President’s victory in parts of Mindanao.

“I categorically deny all the malicious imputations of Mr. Moner, particularly his statement suggesting that I was his ‘handler’ during the 2004 nationwide elections,” Cusi said in an affidavit he read at the hearing.

“I categorically deny giving, remitting and sending money to Mr. Moner to perpetuate poll fraud during the 2004 election. It is very clear that Mr. Moner’s statements are baseless, unfounded and are purely hearsay,” he said.

Moner was confronted by Senate President Pro Tempore Jose “Jinggoy” Estrada for “flip-flopping” on his account of the supposed cheating. Prior to his appearance in the Senate hearing on September 13, he had gone public on two other occasions and had given conflicting versions.

“How do you expect me or the committee to believe you [now]? Is there anything that we can hold on now to ensure that you are now telling the truth, that you will not flip-flop with your decision?” Estrada said.

Moner said he was not “required” to swear on the Koran in his appearance at the Senate on Dec. 8, 2005, where he maintained that there was no cheating in the 2004 election.

He did so on Tuesday and said: “As a Muslim, that is the maximum that we can do, and whether you believe me or not, after I did that, then, your honor, I am very sorry.”

Moner also said he did not speak the truth at the 2005 Senate hearing because he feared for his family’s security. “It was a very unwilling decision on my part,” he said. “I participated a little but I witnessed so much.”

Both Estrada and Senator Aquilino Pimentel III recalled that Moner had earlier admitted receiving P1 million in cash in exchange for his services, allegedly for Cusi and the Arroyos.

“Let’s face reality,” Estrada said. “You got money. You pocketed it… That was the primary purpose. That’s why you were really hell-bent on pursuing or helping the candidacy of Gloria Macapagal-Arroyo.”

After the hearing, Cayetano said Moner’s changing testimonies could still be corroborated using the accounts of other witnesses.

“We’re getting closer and closer to the Palace and the Arroyo couple,” Cayetano said.

‘Logic of the law’

Sumalipao said he did not consider examining the election returns (ERs) from where the CoC figures were taken because “the logic of the law was not to delay the canvass.”

“If we did, that would [cause] delay… We cannot entertain a preproclamation protest at our level and we were not confronted with ERs during the canvassing,” he said.

Outraged, Cayetano asked Sumalipao, who has since been promoted to the rank of regional director of the Comelec in the Autonomous Region in Muslim Mindanao: “Are you saying you cannot [check] the ERs, or was that just your discretion?”

Seconded Senator Francis Escudero: “You had a CoC with zero votes for one candidate. Did that not cause your eyebrow to rise?”

Sumalipao conceded that it was “impossible” for the board of provincial canvassers he chaired at the time to receive a CoC with zero votes for a candidate.

“As I have said, I only learned about that when the Senate was already investigating the [‘Hello Garci’ election fraud case). That’s coming from my heart, your honor,” he said.

Senate records show that Sumalipao appeared in an inquiry by the Senate defense committee that touched on the “Hello Garci” scandal in 2005. At that time, he denied involvement in any election irregularity.

Cayetano told Sumalipao: “The [National Citizens’ Movement for Free Elections] said that in Lanao del Sur, an ER showed Arroyo getting only 964 votes but the CoC indicated 4,700 votes. FPJ got 767 in the ER and zero in the COC.  Is that not a manifest error?”

The Senate blue ribbon chairman, Teofisto Guingona III, also said: “Was it not common sense for you to inquire how that happened?”

Cayetano told Sumalipao that under the law, if the board of canvassers encountered ERs or CoCs that appear to be tampered with, altered or falsified, it was allowed to use other copies of these documents.

“And if necessary, even take the copies found inside the ballot box which may be retrieved under the Omnibus Election Code,” the senator said, adding:

“If you were too concerned about the speed of the canvass, why did you have to count at all? Why not just proclaim Arroyo immediately?”

Also at the hearing, Ansari Alonto, a former consultant of the Office of the Presidential Adviser on the Peace Process, said:

That Sumalipao refused to allow the entry of opposition lawyers during the canvass held at the provincial capitol.

That the Lanao del Sur board of canvassers only tabulated results for governor and other local posts and excluded those for president, vice president and senators.

That those in the capitol building told him the results for the excluded positions would be negotiated (“pag-uusapan pa lang kung sinong bibigyan ng boto”).

Addressing Sumalipao, Pimentel said: “Does not the Omnibus Election Code require that the national and local positions be canvassed simultaneously?”

The witness replied: “I was the chairman and I absolutely deny that statement. We canvass starting with the president down to the local candidates.”

Alonto challenged Sumalipao “to swear before the Holy Koran,”  prompting Guingona to say they should step out and conduct their heated debates in the parking lot.

But Sumalipao approached Alonto, put a hand on the Koran in front of the latter and swore that “the [national and local votes] were counted simultaneously.”

An amused Estrada asked Sumalipao, whose hand was still on the Koran, whether he would also swear that “no cheating happened in 2004.”

Said Sumalipao: “I did not cheat, but I cannot swear for and on behalf of other people. With all these statements [I am hearing], I am inclined to believe there was cheating, your honor.”