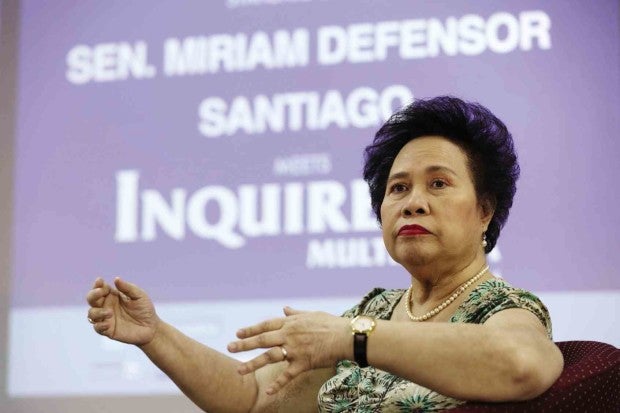 “It appears he is a favorite friend of Joma Sison. We all know here in Manila the NPA is divided into pro-Joma and anti-Joma; so if he has a pro-Joma approach, that might explain why he has the support of leftist groups,” she told reporters after her campus tour at the University of Santo Tomas.

Sison, the founder of the Communist Party of the Philippines, has been in exile in the Netherlands since 1992. The NPA is the armed wing of the CPP.

Santiago tagged Duterte as “the official candidate of the NPA.”

(It’s very dangerous because if people like him don’t get what they want, they might resort to violence.)

READ: Santiago: PH not ready for a Duterte presidency

Asked if the Armed Forces should be bothered with the relationship of Duterte and the NPA, Santiago expressed confidence that the military’s intelligence units are already studying the matter.

With Duterte’s supposed NPA backing, the senator warned of another presidential candidate allegedly backed by the Central Intelligence Agency of the US.

“So we have an NPA candidate. Papayag ba ang CIA–na sinasabi na may relasyon sa asawa ni Grace Poe–na mananalo ang mga komunista? So first of all, merong conflict between the NPA and CIA,” she said.

(Will CIA—who is said to have ties with Grace Poe’s husband—let the communists win; so first of all, there’s a conflict between NPA and the CIA.)

Poe earlier admitted that her husband, Neil Llamanzares, worked as an enlisted man of the US Air Force but did not speak of his having ties with the CIA.

“The CIA always keeps a wary eye on our elections because of our geographical position in these seas. So you’ve got a communist-supported candidate and CIA-financed candidate. Papayag ba ang CIA na talunin [sila] ng NPA (Will the CIA let themselves be beaten by the NPA)?” she said. JE/rga