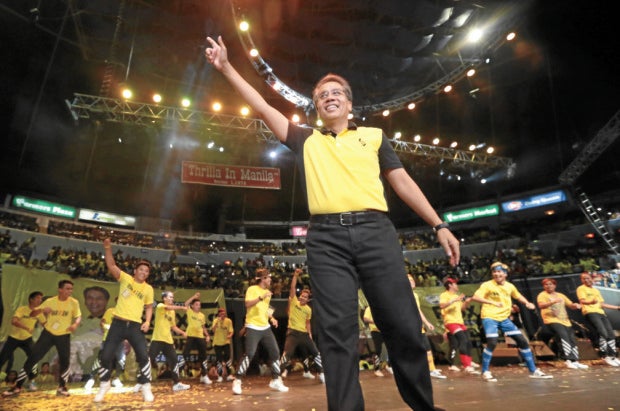 Presidential candidate Mar Roxas flashes the “L” sign during a show of support by the youth at the Araneta Coliseum on Thursday, April 28, 2016. INQUIRER PHOTO / GRIG C. MONTEGRANDE

“I know deciding whom to vote for will not be easy for you. Maybe you have chosen other candidates already. But we also know that the government has its shortcomings and that your complaints are valid,” Roxas said in a media briefing.

READ: Mar on track to win May 9 polls—admin coalition

(But as Leni and I have been saying, we will fill up what’s lacking. If there are shortcomings, we will correct them.)

If elected, Roxas assured that in his and Robredo’s first 100 days in office, they would immediately address the concerns of the public.

A Roxas-Robredo administration will have a strong political will to correct the mistakes of the past administrations, Roxas said.

READ: Roxas: ‘The momentum is with us’

(We will apply our strong political will. We will go against anyone who will get in the way, but we won’t let your complaints be unheard.)

Several issues plagued President Benigno Aquino III’s administration. Most of the controversies involved Roxas, who was the Interior secretary, including the mishandling of the Supertyphoon Yolanda’s rehabilitation effort and the botched Mamasapano operation that killed 60 Filipinos.

However, Roxas also acknowledged the gains of the Aquino administration and called on the electorate to join him and Robredo in boosting these efforts in the next six years.

(I’m calling on all of you. Join Leni and me. We have come this far but we can go farther if we will unite and ensure the victory of a clean and honest administration.)

The administration tandem, along with LP senatorial bets, will hold a grand rally in Naga City, Camarines Sur, the home province of Robredo, later in the evening. RAM/rga