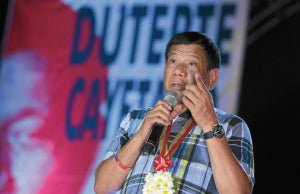 MANILA — In an attempt to disprove the accusations Senator Antonio Trillanes IV, has leveled against him, presidential hopeful Davao City Mayor Rodrigo Duterte came up on Wednesday, with his 11 passbooks, only to allow the media to take a peek at some of his bank transaction history.

In a press conference in Manila on Wednesday, the trash-talking mayor, did not show all and merely presented selected contents of his bank accounts.

He presented the bank statements for the questionable dollar and peso accounts at the Bank of the Philippine Islands on Julia Vargas Avenue.

Duterte’s aide Bong Go showed his passbook, which stated that the balance increased to P128, 829.64 after several supporters made deposits in his account after it was made public.

According to another a bank certificate, this account only had P17,816.98 as of March 31, 2014, three days after Duterte was supposed to have accepted P197 million as alleged by Trillanes.

The Davao mayor showed a transaction history of his dollar account, which as of April 30, 2016, contained a balance of $5, 065.33, including the $10 deposit that a staff member of Roxas had made.

But the mayor had only presented documents, which covered transaction history beginning March 31, 2014.

Trillanes accused Duterte of accepting eight cash deposits totaling P197 million, which were credited to Duterte’s bank account at the BPI Julia Vargas branch on his 69th birthday on March 28, 2014.

Duterte dodged the question on why he would not present a transaction history earlier than March 31, 2014, saying the BPI had refused to issue a certification.

Duterte, on the other hand, trained his guns on the Banko Sentral ng Pilipinas and the Anti-Money Laundering Council, saying they should be held liable for criminal negligence if indeed, the claim of Trillanes about P2.4 billion flowing into Duterte’s bank accounts, were true.

“Kung manalo ako you’re in hot water. Bakit ngayon lang nag-imbestiga sa ‘dirty money’ na to? (If I win, you would be in hot water. Why investigate this dirty money issue only now?),” Duterte said.

Duterte said the BSP and the AMLC never investigated his accounts for the billions of pesos going through his bank accounts as claimed by Trillanes.

Meanwhile, Duterte defended his acceptance of gifts from his friend, Pastor Apollo Quiboloy, founder and leader of the “Kingdom of Jesus Christ, The Name Above Every Name, Inc.,” which included properties and a car, saying the church leader had never meddled in Davao City’s business transactions.

Duterte, likewise, has been using Quiboloy’s private jet in his campaign sorties.

The Davao mayor claimed the pastor has been his friend ever since he was a state prosecutor.

He told reporters he would never accept gifts from other people except Quiboloy, owner and operator of a media outfit, a school, and other properties in Davao.

Under the Republic Act 3019, or the Anti-Graft and Corrupt Practices Act, government officers are prohibited from accepting gifts of significant value from a person other than a member of the public officer’s immediate family.  SFM