Raising teachers’ pay will bring them back to PH–Gordon 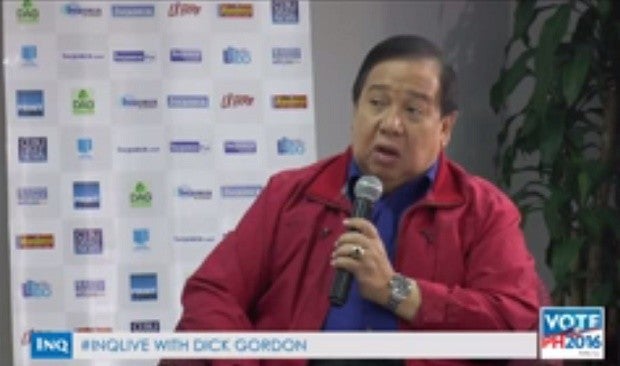 So said senatorial candidate Richard “Dick” Gordon on Wednesday, promising to raise the salaries of teachers to about P40, 000.

During an INQ Live interview in Makati City on Wednesday, Gordon was asked about his priority bill if elected senator in May 9.

He said raising the salary of teachers would be one of his priorities.

He said the government must be able to entice Filipino teachers to go back to the Philippines to practice their profession.

“We should get our teachers back,” he said, adding that raising their salary would be a good start.

He said the Philippines used to have one of the highest literacy rates, but has now declined.

“Bakit pinabayaan natin ang education natin (Why did we neglect education?),” he said, adding that education should be in the priority agenda of our country.

He said teachers hold the future of the youth, which would be the next leaders of our country.

(They are the ones who serve as stewards of our youth eight hours a day. They teach the vision, the values of volunteerism and of good citizenship.)

He said students taking education courses should have scholarship programs and entice them to teach to public and private schools in the country after graduation.

He said quality education would help the nation achieve progress.

“To me education is the key. That (education) would be number one on my agenda,” he said. CDG