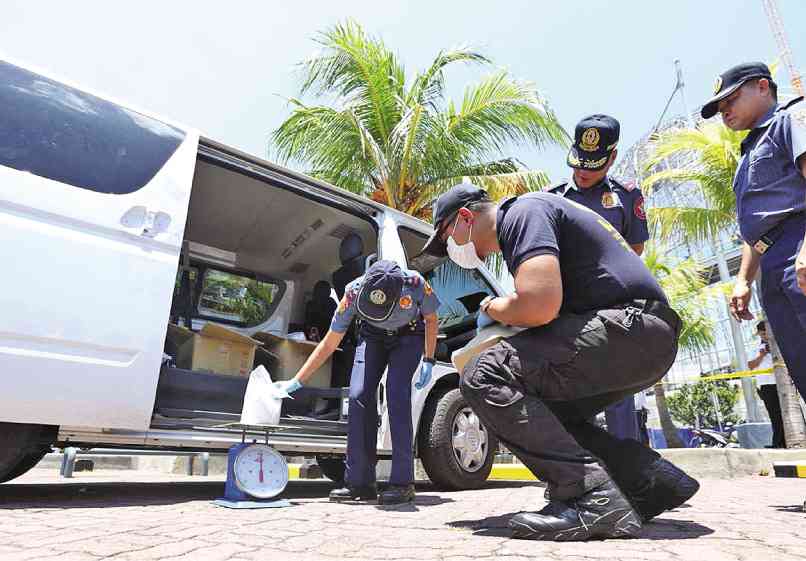 A VAN left for nearly two weeks at the open parking lot of a mall in Pasay City yielded an estimated 75 kilos of methamphetamine hydrochloride or “shabu” worth P250 million when examined by authorities Tuesday morning.

Pasay City police chief Senior Supt. Joel Doria said in an initial report that they received a report about the white Foton van with conduction sticker GB2585 around 9 a.m.  from SM Mall of Asia security personnel.

This was after three Chinese-looking men tried earlier in the day to claim the vehicle which was left at the mall’s open parking area on April 20.

Although they had with them the vehicle’s keys and parking ticket, the mall security personnel asked them to also present documents to prove that they were the owners, considering that the vehicle had been there for some time.

But the Chinese-looking men   could not show the van’s original receipts and the certificate of registration, prompting the mall security personnel to hold the release of the vehicle.

SM personnel told the police that their security personnel also foiled the three men’s attempts to get the van’s contents.

The incident, however, aroused the suspicion of the security team, prompting them to report it to the police.

A search of the vehicle later led to the discovery of 50 packs of unrefined shabu and other components in making the illegal drug, according to Southern Police District chief Senior Supt. Eusebio Mejos.

Also recovered were several bottles of palladium chloride and other ingredients which investigators said could be used to produce another 25 kilos of shabu. The police estimated the total street value of the unrefined drugs at P250 million.

Mejos said they were reviewing the footage taken by closed circuit television cameras in the area for the possible identification of the three men who tried to claim the vehicle.