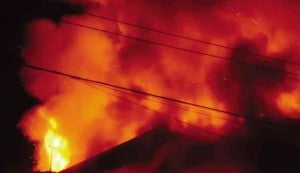 CEBU CITY — A fire that was started by lighted candles – reportedly worth P5,000 — damaged a chapel built in 1925 in Barangay Pitalo, San Fernando town, in southern Cebu, shortly before 5 p.m. on Tuesday.

She said the fire was started by one or two parishioners who lighted several candles at the same time.

SPO1 Rolando Bastida, who led a team of policemen from the San Fernando police station in investigating the fire, said he talked to some witnesses who claimed that at least P5,000 worth of candles were lighted by still unidentified parishioners, which triggered the fire.

The chapel was made of concrete and wood, which was easily gobbled up by the blaze.

Alicaya said the fire ate up the ceiling, the roof and a portion of the altar.

While the residents were able to save some religious images, Alicaya said several religious icons were damaged by the fire.

The chapel, she said, could not be used until fully rehabilitated.

Episcopal Vicar Monsignor Esteban Binghay said that while the edifice was called by the people as a church, it was actually just a chapel under the jurisdiction of the San Isidro Labrador Parish in Barangay Poblacion, San Fernando.

The chapel is considered a heritage because it was constructed nearly 100 years ago.

The façade of the chapel indicated it was constructed in 1925.

Binghay said a priest from the main parish officiated a Mass every Sunday in the chapel.

Alicaya said the fire also spread toward the nearby houses, which were made of light materials.

Alicaya said the residents failed to contact the fire department immediately when the fire broke out.

The fire department received the alarm at 5:05 p.m, but Alicaya said she learned that the fire actually started around 4:30 p.m.

Bastida said several residents first tried to put out the fire themselves by dousing it with pails of water.

The fire caused traffic congestion along the national highway from Pitalo toward adjacent Naga City.

Bastida said they closed one lane of the highway to give way to the fire trucks.

Firetrucks from Naga, Talisay, Minglanilla and Carcar City helped in the operation.  SFM