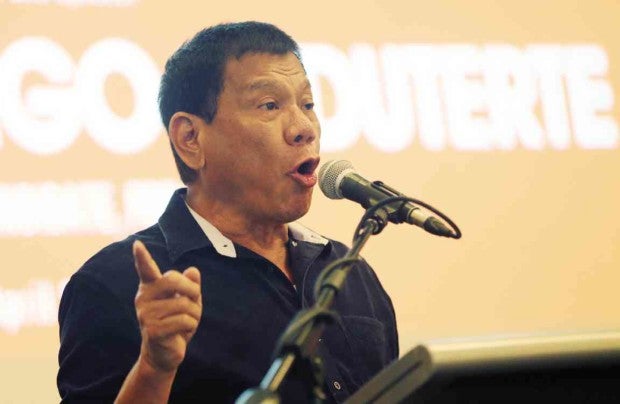 Davao City Mayor Rodrigo Duterte on Monday admitted his friend Pastor Apollo Quiboloy had given him gifts, including properties and cars.

During Quiboloy’s late-night show, Duterte said he had three properties at Woodridge Park, Ma-a, in Davao City given to him by Quiboloy.

“When I was mayor, Pastor bought three properties. He said ‘I will buy properties for your children because if anything happens to you because of your work, if you die …’ because I really go after the criminals here. He gave me a house at Woodridge. I didn’t accept it. And it’s there. Go to Woodridge, who bought it? It’s Pastor who paid,” Duterte said.

The tough-talking local executive said Quiboloy had also given him a Nissan Safari and Ford Expedition.

But the mayor said his daughter, Sara, wanted to keep the vehicle.

“I returned it. Then Sara got mad because she wanted it,” he said. “(I told her) ‘Eh saan ka magkuha ng pang-gasolina? Para kang buang diyan (Where will you get the money for gas? You’re crazy).’”

With his 30 years of friendship with Quiboloy, Duterte said the pastor would always buy two so he could give one to him.

“Every time Pastor buys something, he always gets two. One is mine, for sure,” Duterte said. “He doesn’t have other friends. I mean, a friend he can really trust.”

The mayor also narrated an incident when he went to the United States to treat his “sweaty hands” and Quiboloy offered to pay for the mayor’s expenses for a neurosurgeon, whom he identified as Dr. Martin Cooper.

If elected president, Duterte said he would commute to Davao City every day.

“I do not have to embezzle funds. I can ask Pastor,” he said.

He said Quiboloy offered his plane for his use.

“I told him I’ll just use it because if I win, I’ll go home every night here in Davao,” he said. “That’s service, that’s the contribution of Pastor to our government.”

Duterte is facing allegations of ill-gotten wealth after Sen. Antonio Trillanes IV accused him of having at least P211 million at the Bank of the Philippine Islands (BPI) branch in Julia Vargas Avenue, Pasig City.

Trillanes said Duterte did not declare this amount in his statement of assets, liabilities and net worth.

The senator also released a list of Duterte’s properties to belie the latter’s claim that he was poor.

During his interview with Quiboloy, Duterte said the pastor had been generous with him because of their friendship.

“Pastor has given me so many things, I’m not going to mention everything, over the years,” Duterte said. “But not billions.” RC