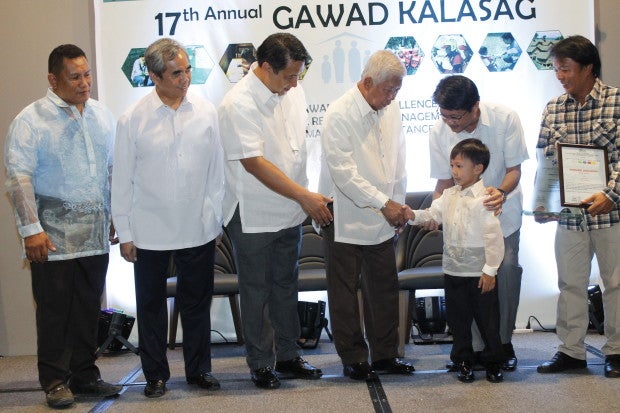 Five-year-old Edmund Jon Nipay was awarded at the 17th Gawad Kalasag Awards for saving his grandmother trapped from a fire in their home in 2014./ OFFICE OF CIVIL DEFENSE

A FIVE-YEAR-OLD BOY from Jones, Isabela was honored on Monday for saving his grandmother from their burning house at the height of a fire in 2014.

His parents, Edgardo and Rose Nipay, recalled that when they left for Jones Public Market in the morning of June 17, a power outage hit their community. Their then three-year-old son Edmund Jon and his 60-year-old grandmother, Adoracion, stayed at home.

Minutes later power was restored. A “sudden surge of electricity” supposedly caused the fire, prompting Edmund Jon to look for his grandmother. Though scared, he tried his best to push his grandmother’s wheelchair outside the house.

When neighbors came to assist them, Edmund Jon went back inside the burning house to get her grandmother’s eyeglasses and cellphone to ask for more help.

“Pag nangyari ulit iyon, gagawin ko pa rin ang ginawa ko para sagipin ang lola ko (If this happens again, I will do it once more to save my grandmother),” he was quoted as saying.

The Gawad Kalasag, founded in 1998, is the country’s premier annual awards for outstanding contribution in the field of disaster risk reduction and management and humanitarian assistance.