Poe on Duterte’s refusal to sign waiver: Charges may be true 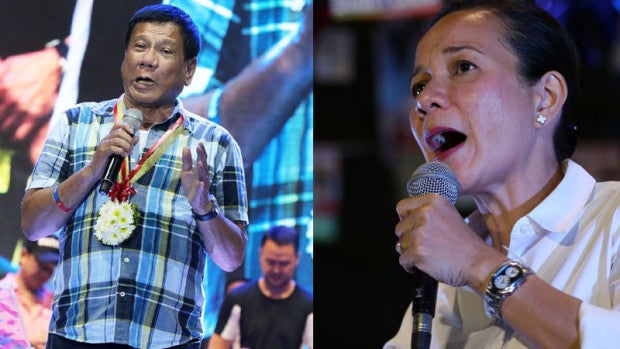 TARLAC CITY, Philippines—Davao City Mayor Rodrigo Duterte’s refusal to sign a waiver allowing the opening of his bank accounts and transactions may be an indication that the allegations against him are true, Senator Grace Poe said on Monday.

Taking up Duterte’s challenge, Senator Antonio Trillanes IV presented an affidavit accusing Duterte of owning P2.4 billion in various bank accounts for the past nine years —from 2006 to 2015.

Asked what she thought about Duterte’s statement that he would only open his bank accounts and transactions if his rivals would do it first, Poe said: “Syempre, ang dating sa tao noon nagpapalusot (Of course, people would think that he is only making excuses.).”

(But I think, with all the issues I’ve been through, the easiest thing to do so you would not encounter any problem is to show whatever evidence you have to prove your innocence because it would help you.)

(And of course, it would be disturbing to have a leader who would flip-flop on his words such as having a disclosure [that they would open the account] but would later on retract it.)

Poe urged the public to scrutinize the candidates, especially those  promising to bring “real change” once elected.

(To our countrymen, let us ponder, if we want change, who would really bring it? This has been the practice of those who have been in the government for so long, they know how to twist the system. That’s why I have submitted everything I could.)

Like other candidates, Poe said she is not perfect but she said her life is an open book.

Asked how a Poe presidency would differ from Duterte’s, Poe promised a more peaceful and progressive Philippines.

(As you can see, my life is an open book, they can determine it for themselves. I am not perfect, every candidate is not, but when I committed any wrongdoing, I admit it.) RAM/rga