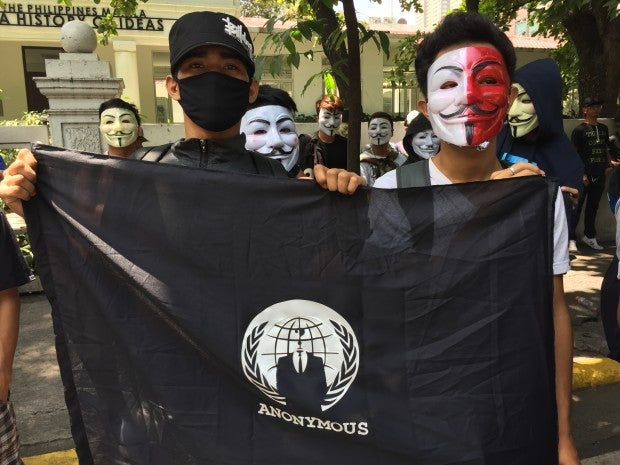 Members of Anonymous Philippines outside the Department of Justices (DOJ). Tetch Torres-Tupas/INQUIRER.net

Anonymous Philippines has declared a “ceasefire” in hacking of government websites from Monday until a new president has been proclaimed but warned that they are closely monitoring the May 9 national polls on possible rigging of the results.

“Bantayan nyo lang po kami (Watch out for us),”  the groups’ designated spokesperson told reporters during a protest before the Department of Justice (DOJ) to call for the release of their friend, Paul Biteng, who is facing criminal cases for defacing the Commission on Elections (Comelec) website.

“Hindi ho kami nagsasalita ng tapos pero alam niyo na ang data ay nasa Internet so bantayan niyo na lang ho kami (We are not ruling anything out but you know that the data are on the Internet so watch out for us),” the group’s spokesman said, referring to the data of over 50-million voters that were placed on a data dump and eventually on a website.

However, the group denied involvement in the release of the voters’ data in public but admitted that they were responsible for defacing the poll body’s website.

They said they have been monitoring the Comelec system since 2010.

In 2013, they said they  already warned the Comelec that its system was weak.

(We revealed it in 2013 when we said that Comelec‘s system is weak. Isn’t this negligence? While Comelec’s officials are raking in public funds, they are neglecting our security.)

“Bantayan niyo po kami. Andito lang kami. Kasama namin ang buong Anonymous, ang Cyberboard (Watch out for us. We are on standby. We are with the entire Anonymous, the Cyberboard). Expect us,” he added. RAM