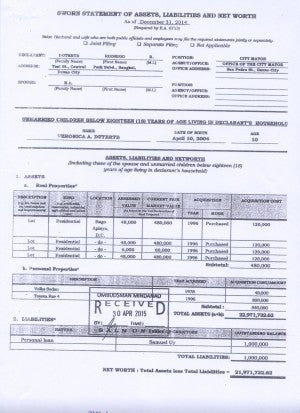 MAYOR Rodrigo Duterte’s 2014 statement
of assets, liabilities and net worth

COTABATO CITY — A dentist from Cagayan de Oro City has refuted reports naming him as some sort of a dummy owner of properties linked by Senator Antonio Trillanes IV to the family of presidential candidate and Davao City Mayor Rodrigo Duterte.

Dr. Guian Paolo D. Duterte, in a statement released Sunday, also denied being a relative of Duterte.  He said he found it unfortunate that the senator had unnecessarily dragged his name into his series of media exposés on allegedly hidden properties and bank accounts of Mayor Duterte, the frontrunner in voter-preference surveys.

“It is unfortunate that my name has been publicly mentioned in the GMA7 News report last April 27 of which Senator Antonio Trillanes IV accused Mayor Rodrigo Roa Duterte and his family of possessing illegally amassed wealth,” said Dr. Duterte.

“For the record, I am a practicing pediatric dentist and I have established regular clientele, through private practice based in Cagayan de Oro City,” he said.

The dentist added: “Through my profession, I was able to secure a loan from the Bank of Philippine Islands (BPI) to purchase the real estate property in Cagayan de Oro mentioned in the reports of GMA7 and Senator Antonio Trillanes IV.” 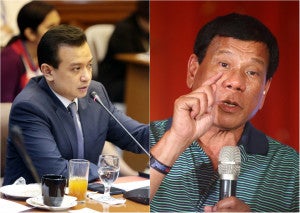 Dr. Duterte said all his life he has never been a politician, and neither has he sought elective position, nor has he run for public office.
“Further, our roots come from Cebu and I’ve yet to establish the degree or any connection whatsoever, on how the good Mayor Rodrigo R. Duterte and I are directly related,” the dentist said.  SFM