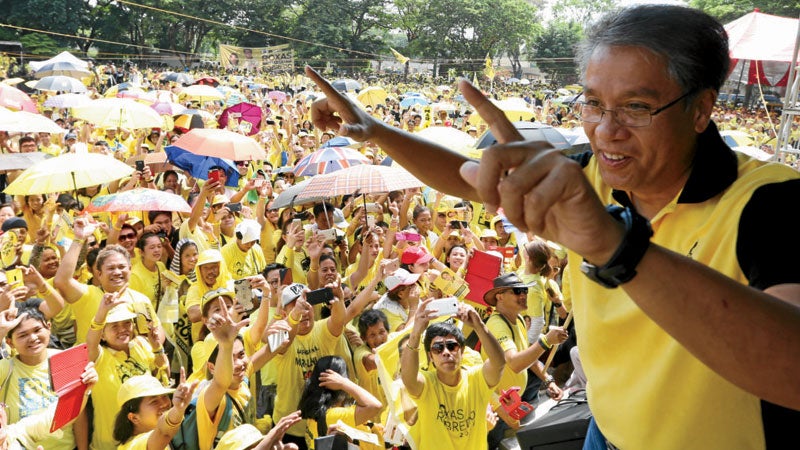 WALK FOR MAR-LENI Presidential aspirant Mar Roxas greets his supporters after a unity walk for him and his running mate, Leni Robredo, on the Quezon City Hall parking grounds on Sunday. NIÑO JESUS ORBETA

UNLESS Davao City Mayor Rodrigo “Digong” Duterte can explain how he earned his money and acquired his properties, the presumption under the law is his possessions are “ill-gotten wealth,” Liberal Party (LP) standard-bearer Mar Roxas said on Saturday.

Short of accusing his rival outright of corruption, the former interior secretary admonished the firebrand mayor for refusing to identify the source of his wealth.

“We have seen in the past month and year, there has been no explanation about where this wealth has come from, as well as his lands, buildings, apartments,” Roxas said at a press conference in Laoag City.

“How have these been financed? Were these loans? Where did the money come from? Did he earn it? Did he inherit it? If there is no reasonable explanation for this, the presumption in the Anti-Graft and Corrupt Practices Act is this is ill-gotten wealth, isn’t it?” he said.

Duterte had P227.4 million in a joint account with daughter Sara at the Bank of Philippine Islands (BPI) branch on Julia Vargas Avenue in Pasig City in 2014, records of his bank transactions showed.

On his 69th birthday on March 28, 2014, Duterte received seven deposits amounting to P193.7 million in his account at BPI Julia Vargas, according to Sen. Antonio Trillanes IV, who is running for Vice President as an independent candidate.

Trillanes said the mayor did not declare the amount in his statement of assets and liabilities and net worth (SALN) for 2014, a ground for dismissal from government service.

Besides the bank deposits, Duterte has 41 properties in his name, according to Trillanes.

On Saturday, Duterte said he was willing to open his bank account transactions as far back as 20 years as he had nothing to hide, but on the condition that all his rivals would do the same.

Shortly after arriving in Sorsogon City, the mayor was asked about Trillanes’ challenge for him to show the transaction history of his BPI accounts for the past nine years.

Trillanes earlier said opening the account for the past nine years was important because “if Duterte has already withdrawn the money before Monday, then the total amount of transactions would not be reflected on the current account balance.”

“Make it 20 years,” Duterte said in response to Trillanes’ challenge.

He also said he was willing to open “all transactions” in his account, adding it only contained about P17,000 and not P227.4 million as the senator claimed.

Documents provided by Trillanes showed that transactions amounting to P2.4 billion in 17 accounts of Duterte in three banks, including the BPI Julia Vargas branch, were recorded from 2006 to 2015.

Duterte first dismissed as mere fabrication Trillanes’ claim that he had P227.4 million at the BPI Julia Vargas branch. He owned up to the account only after certain individuals deposited P100 to P500 to it, proving its existence.

The mayor later said he had “less P200 million” in the BPI branch and that he did not declare it in his SALN because he had already spent it. He said the money came from friends as birthday gift.

Ilocos Norte Rep. Rodolfo Fariñas said Duterte could explain the bank transactions as gifts if the amounts were “minimal.”

“Of course, there are still donor’s tax and everything. So there’s a need to explain this so the public will know. But this one [Duterte] is denying it, so we will see. These are allegations, and he has a chance to disprove these allegations,” said Fariñas, who along with 21 of the 23 mayors in his province of Ilocos Norte expressed support for Roxas’ candidacy.

The lawmaker is one of the prosecutors of the House of Representatives during the impeachment trial in 2012 of then Chief Justice Renato Corona.

Asked about the transactions amounting to P2.4 billion in the 17 bank accounts, Duterte on Friday gave flippant answers to reporters, saying at one point that he could not remember the exact amount “because of the zeroes.”

Also on Friday, Sara challenged Trillanes to file a case against her and her father so “we can answer properly.” She neither confirmed nor denied that she and her father had joint bank accounts.

Roxas characterized the Davao mayor as a danger to the country’s well-being should he be elected President in May.

“With this hidden wealth, this shows the danger in front of us and the greatest challenge facing us,” said Roxas, who trails Duterte and Sen. Grace Poe in voter preference polls.

Duterte’s popularity has surged in recent weeks in spite of being the target of attacks over a rape joke about an Australian missionary who was assaulted in a 1989 prison siege in Davao, as well as reports about his undeclared millions in hidden bank accounts.

President Aquino’s chosen presidential candidate implied that a Duterte presidency would be a step back to previous administrations whose leaders were embroiled in messy corruption scandals that sank the economy.

“We have been through that, which is why for me, his camp should explain adequately how they came by all these possessions,” he said.

On Sunday, he sharpened his tirade against the tough-talking Davao mayor.

“If you accept a gift of millions, that’s a bribe,” he said. “Do we want to go back to the time when deception, corruption, theft prevailed?”

Read Next
SHS tracks offer career paths to students
EDITORS' PICK
Gilas out to prove Korea win not a fluke; Tab fires back at ‘lucky shot’ remark
Duterte to issue memo on face shields this week
LOOK: ‘Low vaccination’ turnout in 4 Manila sites after no walk-in policy
Eleazar: PNP open to ICC probe but PH judicial process is working
Piolo Pascual: The Ultimate Heartthrob continues to level up
SANTIS Delicatessen: The road to survival is sweet and savory
MOST READ
Duterte to issue memo on face shields this week
Palace: Face shields no longer needed to be worn outdoors
DFA opening 10 satellite offices to boost passport services
Lacson or Pacquiao a possible presidential candidate for NPC – Sotto
Don't miss out on the latest news and information.