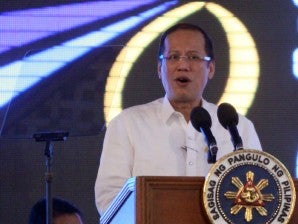 President Benigno Aquino III vowed on Tuesday the government would get the killers of Italian priest Fr. Fausto Tentorio even if they belonged to groups linked with the military.

The President acknowledged that “one theory” being looked into by authorities was the possibility that paramilitary groups were behind the murder of Tentorio in North Cotabato on Monday.

Speaking to reporters after attending the 110th anniversary of the Philippine Coast Guard at its headquarters in South Harbor in Manila, Mr. Aquino said his officials had informed him about the “specifics of what happened” as well as a “backgrounder” on Tentorio.

The President said that the  political leaders in the area were exploring leads to the killing.

“At this point in time, we are not prepared to name the suspects involved in this. Our police are now looking into the leads that were unearthed,” he said.

Told that some paramilitary groups could be responsible for the killing, he said: “That is one theory. There are other theories pointing to other threat groups.”

He vowed his government would go after Tentorio’s killers.

“Regardless of who did the crime, they will have to pay. That has been the direction of this administration from the start—you do the crime, you will be in jail,” the President said.

In a text message, Justice Secretary Leila de Lima said she had directed the National Bureau of Investigation (NBI) to conduct “an immediate preliminary probe” of the murder.

De Lima said she also instructed Undersecretary Francisco Baraan, chair of the Department of Justice (DOJ) special task force on extrajudicial killings, to closely coordinate with the NBI and the Philippine National Police and monitor the progress of the inquiry.

Members of Hustisya, an organization of victims and survivors of extrajudicial killings, picketed the DOJ main office in Manila on Tuesday to hold a memorial for the slain priest and to ask the government to “leave no stone unturned” in the investigation.

“We share the loss of the community whom Father Tentorio served, and celebrate the life he had devoted for the small ones for more than half of his lifetime,” said Hustisya secretary general Cristina Guevarra.

Together with other human rights organizations, the group demonstrated at the DOJ office and displayed placards saying, “Justice for Fr. Tentorio! Stop the killings! End Impunity!”

Tentorio’s killing will add to the 50 victims of extrajudicial killings under the Aquino administration, according to Hustisya.

The Italian Embassy in Makati City on Tuesday reissued its advisory to its 1,010 nationals in the country, including 250 to 300 Catholic priests and nuns, to avoid traveling to Mindanao.

“Mindanao has always been a red area, as far as we’re concerned. We have repeatedly issued a maximum warning for them not to go there. Unfortunately, most of the Italian priests and nuns disregard our warning because it’s part of their mission,” Italian Ambassador Luca Fornari told the Philippine Daily Inquirer. With a report from Jerry E. Esplanada

Read Next
Arakan villagers mourn death of Fr. Pops
EDITORS' PICK
Legarda emphasizes role of ICC/IPs in nation building this IP month
Isko Moreno bares ‘two-pronged’ approach to rehabilitate MSMEs
NCR’s COVID-9 alert level may be downgraded from 3 to 2 soon — DOH
What’s at stake for every fighter at ONE: NextGen
Gordon calls 2 Pharmally execs ‘Senate fugitives’ after no-show in probe
Climate Change Commission and Nestlé PH to discover sustainability-focused solutions
MOST READ
LJ Reyes says Paolo Contis made ‘no efforts’ to talk to her after their split
Gordon to Duterte: You? Teaching me courtesy?
Gordon calls 2 Pharmally execs ‘Senate fugitives’ after no-show in probe
PDP-Laban Cusi wing Senate bets willing to give way to Duterte
Don't miss out on the latest news and information.