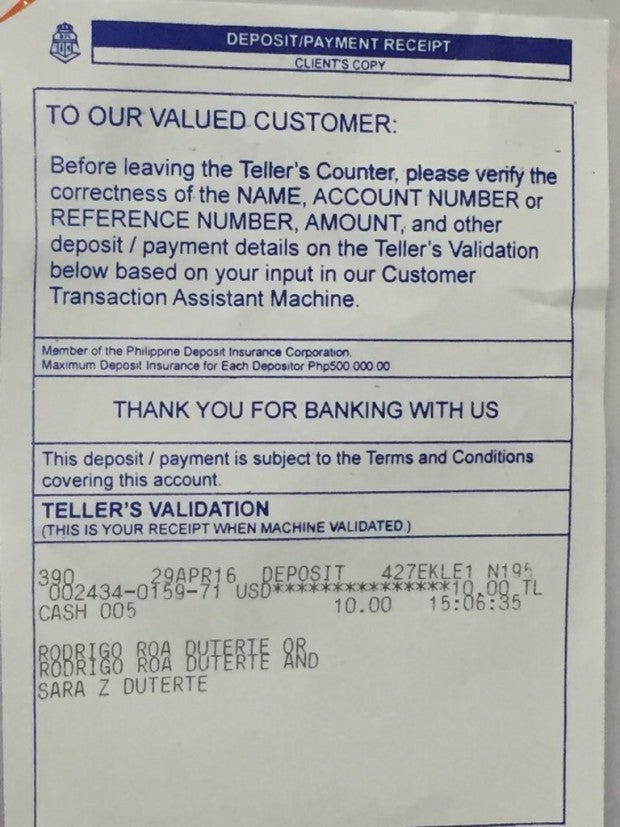 The camp of Liberal Party standard-bearer Mar Roxas has found that one of Davao City Mayor Rodrigo Duterte’s alleged secret bank accounts is a dollar account.

Roxas revealed this in a press conference on Friday at the LP headquarters amid reports that the mayor, the presidential survey front-runner, had billions of pesos in several bank accounts undeclared in his statement of assets, liabilities and net worth (SALN).

“We wanted to verify if Sen. [Antonio] Trillanes’ [IV] allegations were true. So we deposited $10 to one of the accounts at nakita ito ay nasa pangalan ni Rodrigo Roa Duterte and Sara Z. Duterte sa BPI din ito,” Roxas said.

A check made by the camp of Roxas found that one of Duterte’s alleged seven joint accounts with his daughter Sara, reported in the Inquirer, was a dollar account.

Upon checking the existence of Duterte’s alleged accounts in BPI Julia Vargas, Roxas’ camp was advised that they could not place a peso deposit in one of the accounts.

Members of Roxas’ staff showed to the media a copy of the deposit slip indicating that the account was under the names of “Rodrigo Roa Duterte and Sara Z. Duterte.” RC/rga