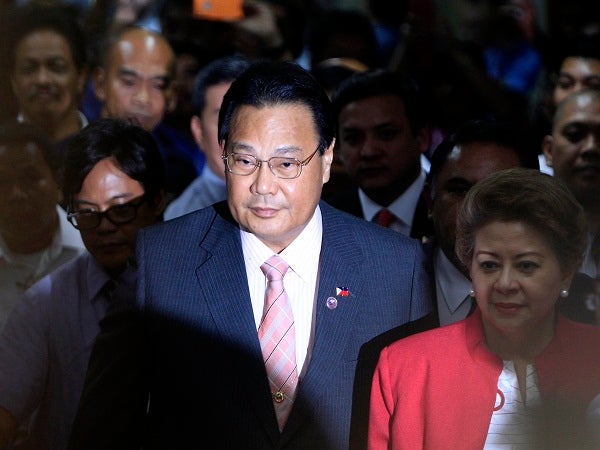 The SC PIO said the family of the former Chief Justice  informed the court of his passing.

Chief Justice Maria Lourdes Sereno ordered that the  flags in the Supreme Court and all courts nationwide be flown at half-mast.

His family appealed for prayers.

He was the 23rd Chief Justice of the Philippines.

His appointment as Chief Justice was marred with controversy after it was made within the appointment ban or a month before President Gloria Macapagal-Arroyo’s term expired. Critics branded it as a “midnight appointment.”

The appointment was denounced by then presidential candidate and now President Benigno Aquino III. After Aquino won, he refused to recognize Corona, bumped off tradition and took his oath of office before then Supreme Court Associate Justice, now Ombudsman, Conchita Carpio-Morales.

But the SC, in the case of Arturo M. De Castro v. Judicial and Bar Council, affirmed the President’s right as an incumbent president to appoint the Chief Justice. Voting 9-1, the high court said the 90-day period for the President to fill the vacancy in the SC is a special provision and that the appointment ban does not extend to the SC.

Corona was the first official to be removed from office by impeachment, ending a two-year rift with President Aquino.

READ: Corona : I’m at peace even if P-Noy hits me

The former Chief Justice attributed his impeachment to the SC’s decision unanimously awarding Hacienda Luisita—a 6,400-hectare sugar estate owned by the family of President Aquino–to its tenant farmers who had been demanding for decades that the property come under the agrarian reform program.

A year after he was impeached, Senator Jinggoy Estrada revealed that lawmakers received their respective Priority Development Assistance Fund (PDAF), or pork barrel, ahead of Corona’s conviction, which the Palace has denied. CDG/rga

What Went Before: Charges against former Chief Justice Corona