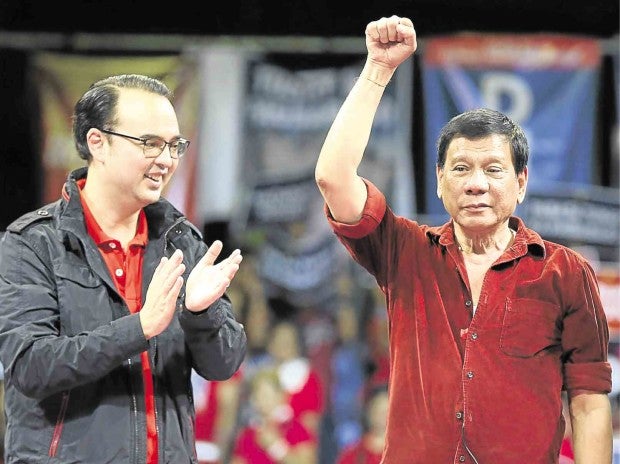 “It is only a pledge to open their bank accounts,” said Raul Palabrica, a corporate lawyer who writes a business column in the Philippine Daily Inquirer.

Palabrica was asked to comment on the allegation of Sen. Antonio Trillanes IV that Duterte did not declare P227 million—not P211 million as originally reported—in an account he kept at the Bank of Philippine Islands (BPI) branch on Julia Vargas Avenue in Pasig City.

Duterte and his allies responded by saying the Davao City mayor signed a “waiver” on March 11, to show his transparency and that he was not hiding anything.

In an interview, Palabrica said the document, a photo of which was published in the Inquirer  on Thursday, was not a waiver for opening bank accounts.

The document states: “We the candidates for President and Vice President in the 2016 national election, hereby pledge to open all our bank accounts in local and foreign currencies both here and abroad in the interest of transparency and accountability.”

The document was signed by Duterte and Cayetano, but not by the other presidential and vice presidential candidates.

Trillanes rejected the document, as it was clearly not a waiver but a “manifesto” by all the presidential and vice presidential candidates declaring their willingness to disclose their finances in the interest of transparency.

“The [manifesto] is just a press release. Don’t believe that,” Trillanes said.

According to Trillanes, a waiver should be addressed to the bank where the account to be opened is maintained.

Palabrica agreed. “A waiver has to be expressed and specific. And it is directed to a particular bank or person,” he said.

The privacy of bank accounts is protected under Republic Act No. 1405, or the bank secrecy law.

How it is done

“To meet the requirements of the bank secrecy law, (a waiver) should be, first, written. It should be addressed to the bank. And [the bank should be told] what exactly [is being waived],” Palabrica said.

As “example,” he continued, “the letter should say,

“‘To whom it may concern:

“‘To all BPI offices:

“‘I, (name of person waiving privacy), hereby waive my right to secrecy in all bank accounts and all financial records I have with you.

“‘This waiver and/or authority shall remain valid and binding until I overrule or set it aside.’”

And the waiver, he said, should be signed by the person waiving bank secrecy.

Without these elements, the waiver signed by Duterte and Cayetano is “empty,” Palabrica  said.

If Duterte wants to prove that the allegations of Trillanes are false and the purported BPI account is a fabrication, he should give the senator a true waiver, Palabrica said.

“The best way to prove it is fabricated [is] I will give him my authority: ‘Here, go to BPI.’ And BPI comes back and says:  ‘We wish to inform you that Mr. Duterte does not have any account,’” he said.

“I will then go back to Trillanes and slap it on his face: ‘Here, what you said is a fabrication,’” Palabrica said.