After hostage beheading, is Philippines facing IS threat? | Inquirer News

After hostage beheading, is Philippines facing IS threat? 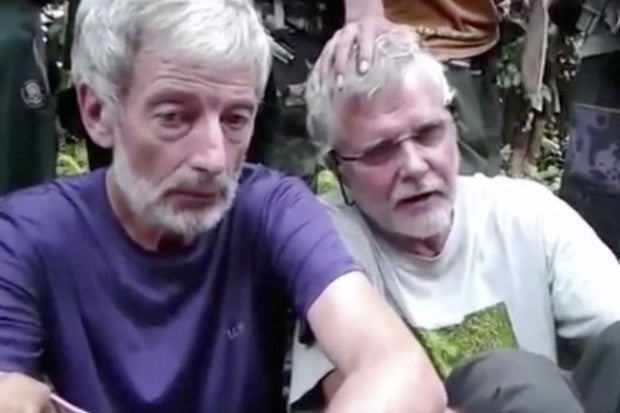 This image made from undated militant video shows Canadians John Ridsdel (right) and Robert Hall. Canada’s Prime Minister Justin Trudeau confirmed that the decapitated head of a Caucasian male recovered on April 25 in the southern Philippines belongs to Ridsdel, who was taken hostage by Abu Sayyaf militants in September 2015. AP

Months before Abu Sayyaf militants beheaded retired Canadian mining executive John Ridsdel in the tropical jungles of the southern Philippines, they showed him pleading for life in a video with three other hostages that demanded a record-high ransom.

The scene was all too familiar in a Southeast Asian nation that has struggled with ransom kidnappings by the Islamic militants for years, except for two things.

In the video that appeared in November, two black flags with Islamic State group symbols were displayed by the heavily-armed Abu Sayyaf fighters in the backdrop of lush foliage. Then after a deadline for ransom lapsed on Monday, they killed the 68-year-old Ridsdel — instead of waiting patiently for the money as the mostly impoverished rural fighters have done in the past.

Shocked by the outcome, many in the largest Roman Catholic nation in Asia are asking if this is same band of militants the government has long dismissed as ransom-seeking bandits. Or, has the Philippines fallen into a growing list of countries that are now grappling with the spread of the Islamic State group from Syria and Iraq?

The Philippine government has insisted the IS still has no presence in the country’s south, homeland of minority Muslims who rose up to seek a separate state in the early 1970s.

In his first remarks following Ridsdel’s killing, President Benigno Aquino III, who is left with two more months in office, ran a history of the Abu Sayyaf’s brutal attacks, describing it as a group of outlaws and vowing “to devote all my energies toward ensuring that, at the very least, this will be a very seriously degraded problem.”

“Even as it poses as a group of Islamic freedom fighters, the Abu Sayyaf has behaved as criminals focused on enriching themselves by taking hostages for ransom,” he said, describing them as opportunists who want to “align themselves with ISIS to gain access to the funds and resources of ISIS.”

Terrorism experts, however, believe that a key Abu Sayyaf faction and at least two other small armed groups have gone beyond pledging allegiance to the Middle East-based jihadis on video and have struck a new alliance under the IS flag.

Some foreign militants from Malaysia, Indonesia and the Middle East helped forge the union under an overall leader, Isnilon Hapilon, a veteran Filipino militant who was among those who founded the Abu Sayyaf on southern Basilan Island in early 1990s, said Rodolfo Mendoza, a retired police general who helped lead counterterrorism efforts.

It’s not yet clear if the foreign militants, three of whom were killed in military offensives last year and this year, were IS fighters or sympathizers who wanted to recruit Filipinos into the IS fold, according to the Philippine military.

Another armed group, which has brandished the IS group’s black flag in southern Butig town but is not yet known to have joined Hapilon’s alliance, recently posted a picture online of two kidnapped villagers in orange garb before they were beheaded as suspected military spies. It’s the first known instance local militants dressed their captives in orange, as IS extremists do.

An unusual surge in kidnappings, including daring attacks on three tugboats in and around the Sulu Sea that captured 18 Indonesian and Malaysian crewmen starting last month, along with recent beheadings, may be a way by the emerging bloc of militants to dramatize their capability and brutality and convince the IS group to fully recognize them as an affiliate entitled to funds and training support, Mendoza told The Associated Press.

Earlier this month, an Abu Sayyaf ambush in Basilan killed 18 soldiers in the military’s largest single-day combat loss so far this year.

“They’re now able to project internationally that they deserve the serious recognition of mother ISIS,” Mendoza said. “The kidnappings that they do shouldn’t only be seen as plain banditry.”

After the Sept. 11, 2001, attacks in the United States, the militants tried to forge a formal alliance with al-Qaida but those efforts failed. The Abu Sayyaf tried for years to foster impressions that it’s formally allied to al-Qaida for survival, said Abu Muslim, a former Abu Sayyaf ranking member who has been captured and now cooperates with the government.

“There was really no direct connection between the ASG and the Al-Qaida then,” he said. “But the impression that there was gave the group stature and a veil of notoriety that was important in raising funds.”

Ahmed Hashim, a counterterrorism and defense policy expert with the S. Rajaratnam School of International Studies in Singapore, said European and Middle Eastern countries have been more exposed to the dangers by IS militants, but a vulnerable period awaits Southeast Asia.

A few hundred Malaysian and Indonesian militants were believed to have traveled to Syria and Iraq in recent years. There are unconfirmed reports of a few Filipinos who have also joined the fighting.

“Not too many have come back yet,” Hashim said. “The biggest danger is for Malaysia and Indonesia.”

Under any label, the Abu Sayyaf is clearly a “terrorist group” that will face offensives for its “gruesome attacks on innocent people,” the military said.

A day before he was abducted from a marina on Samal Island, where he and his friends berthed their yacht, Ridsdel wrote in his blog about the thrill of his sea adventures and a hint of the unexpected that may suddenly come with it.

“With a little bit of wind, it feels like the craft is flying, as it skims over the water rather than undulating with it,” he wrote. “All very wonderful, until you have to go upwind in rough weather.”