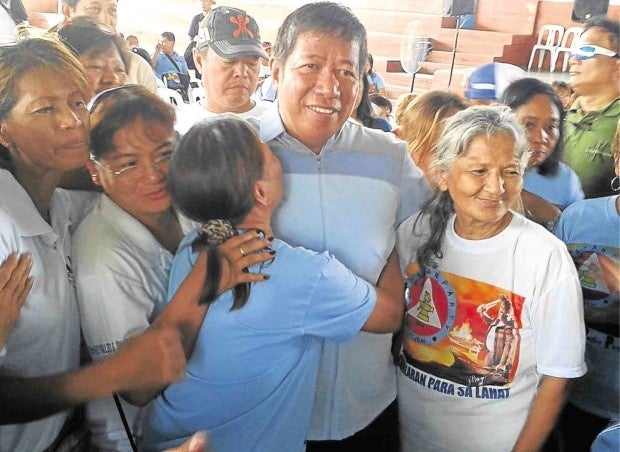 The Court of Appeals Second Division on Thursday ordered the Office of the Ombudsman to suspend the implementation of its order removing from his post San Jose del Monte, Bulacan Mayor Reynaldo San Pedro due to an administrative case.

In a four-page resolution, the appeals court has ordered Ombudsman Conchita Carpio-Morales “to cease and desist” from enforcing her March 7 decision removing San Pedro from his post.

The temporary restraining order issued by the appeals court is valid for 60 days from the filing of a bond of P200,000.

“Considering that San Pedro was meted the supreme penalty of dismissal from service… it was reasonably necessary to protect (his) legal rights pending resolution of the extant appeal … to prevent any irremediable remedy that San Pedro may sustain in view of the enforcement of the Decision in question,” the appeals court said.

San Pedro took his case to the appeals court after the Ombudsman removed him from office after finding him guilty of grave abuse of authority and grave misconduct with accessory penalties of cancellation of eligibility, forfeiture of retirement benefits and perpetual disqualification for reemployment in the public service.

He was dismissed from service following a complaint filed by Rufino Gravador, former engineer of the local government of San Jose del Monte.

Gravador accused the local chief executive of alleged constructive dismissal of him and oppression for assigning him as acting city agriculturist after he disobeyed what he alleged to be unlawful orders from San Pedro.

Gravador took a leave of absence and appealed  to the Civil Service Commission, which ordered San Pedro to reinstate him to his previous post as city engineer last July 2015.

However, five days later, San Pedro issued an order designating the city assistant engineer, Arnel Vitug, as the city building official and separating that function from the office of the city engineer.

The Ombudsman said this is a clear violation of Republic Act 7160 or the Local Government Code (Section 477 a), which states that the city and municipal engineer should also act as the city or municipal building official.

Gravador also accused San Pedro of being behind the failed assassination attempt on him last December after he stood as a witness in a plunder complaint he filed against San Pedro, Vice Mayor Eduardo Roquero Jr. and 15 other city officials for the construction of the P300-million San Jose Del Monte City Hall which he claimed was overpriced by P160 million.

San Pedro through counsel Atty. Ferdinand Topacio told the appeals court that the penalty imposed by the Ombudsman was excessive and that he was deprived of the right to due process.

He added that he was removed from his post on a ground different from that alleged in the complaint filed by Gravador. RAM/rga