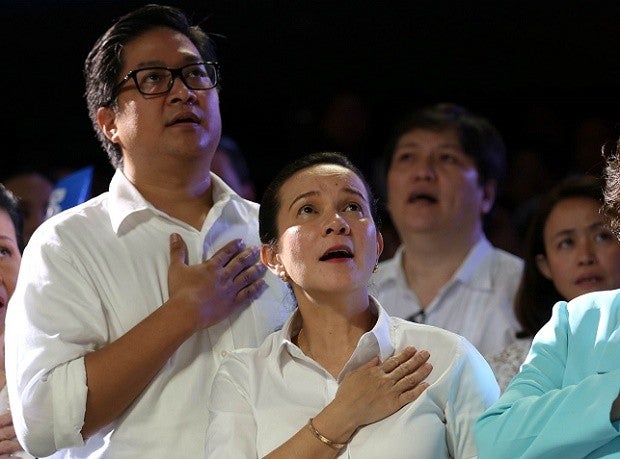 LEGAZPI CITY, Philippines – Vice presidential camdidate Francis “Chiz” Escudero laughed off on Thursday another rumor that he had a fistfight with the husband of his running mate, Senator Grace Poe.

(That’s not true. Neil, Senator Grace and my family have been close for a long time. Can’t they think of other issues or rumors that they keep using and going back to this?)

Neil is the nickname of Poe’s husband, Teodoro Misael Llamanzares.

(First, it was shouting, then fighting. Now, when the election is drawing near, it has turned into a full-on fistfight.)

To prove that the rumor was not true, he noted that he did not have a single bruise on his face.

Escudero reiterated that he had no rift with Poe and her husband supposedly over campaign contributions.

(In fact, almost nothing is given to the vice presidential candidate because it is not known yet which office he will hold. Usually, whoever helps in the election, naturally, they go straight to the president.

Senator Grace Poe shoulders the finances, including those of team Galing at Puso as we make rounds in the different parts of the country with our senatorial slate.)

READ: Escudero laughs off reports on ‘rumored rift’ with Poe

Poe also laughed off the rumor.

(You’re just looking for another story to make this campaign exciting.

(Senator Chiz said, if that were true, for sure, his rival would be covered in bruises. It’s not true, he’s the one who’s badly bruised.) CDG