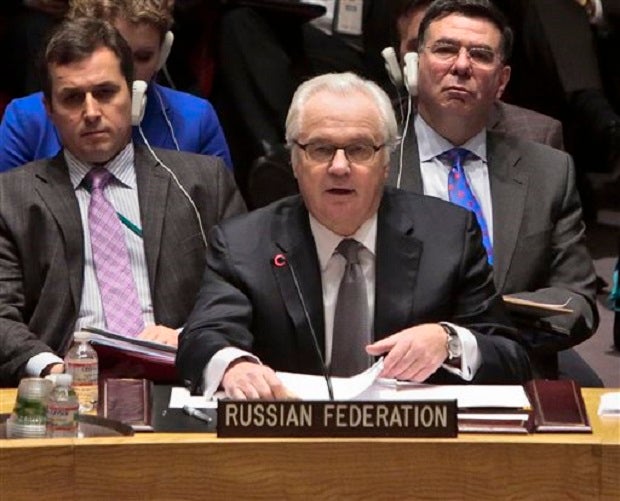 UNITED NATIONS — Russia said Wednesday it has asked the UN Security Council to blacklist two powerful Syrian rebel groups that it considers “terrorist organizations,” one which is playing a key role in political negotiations aimed at ending the five-year conflict.

Russia’s UN Ambassador Vitaly Churkin told reporters the two hardline Islamic groups — Jaish al-Islam, or the Army of Islam, and Ahrar al-Sham — aren’t observing the cessation of hostilities in Syria “and are engaged in terrorist activities” and therefore should be subject to sanctions.

Mohammed Alloush, a leading figure in Jaish al-Islam, which is backed by Saudi Arabia, heads the High Negotiating Committee, the main opposition umbrella group, at the Geneva peace talks which are largely stalled. The High Negotiating Committee postponed its participation in the talks, which wrapped up their latest round on Wednesday, citing an escalation in fighting and insufficient aid deliveries to besieged areas.

The Syrian government, which Russia backs, also considers the two groups “terrorist” organizations and opposed their representation in the Geneva talks.

But Russia’s attempt to get the Security Council committee monitoring sanctions against al-Qaida and the Islamic State extremist group to add the two Syrian rebel groups to the blacklist is facing an uphill struggle.

Van Bohemen said he told the council that there are a lot of bad people in Syria, but not every one of them is “a terrorist.”