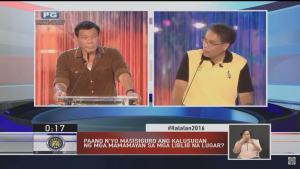 TALISAY CITY, Cebu — Liberal Party (LP) standard bearer Mar Roxas challenged his rival to the presidency, Davao City Mayor Rodrigo Duterte, to be truthful and reveal the contents of his bank accounts following the statement of Sen. Antonio Trillanes IV that the frontrunner in the presidential surveys has been keeping P211 million in undeclared wealth.

Roxas told a news conference on Wednesday afternoon, that Duterte should explain about these bank accounts.

Trillanes alleged that Duterte did not declare the P211 million in bank deposits in his  Statement of Assets, Liabilities and Networth (SALN).

Roxas reminded Duterte that he and his running mate, Sen. Alan Cayetano, had signed a statement-manifesto that they were willing to open their bank accounts and had even dared other candidates to do the same.

Roxas said Duterte has turned out to be not good at keeping his word, citing the challenge the LP candidate threw at the mayor to withdraw his candidacy should Roxas present proof that Philhealth had beneficiaries in Davao City.

“Ang tinatakbohan po natin posisyon ay presidente nga republika ng Pilipinas. Ang pinanghahawakan natin ay tiwala. Paano natin papanatilihin yung pagkakaisa ng isang buong bansa kung pabago-bago ka sa iyong sinasabi? (We are running for President of the Republic of the Philippines. What we are holding onto is trust. How can we continue uniting the country if we keep on changing what we are saying?),” he said.

Roxas stressed that in the 20 years he was in government, his SALN was never questioned.

Asked if he would call for an investigation, Roxas said enough people in government could do it.

He cited the case of former Chief Justice Renato Corona who was removed for lying in his SALN. 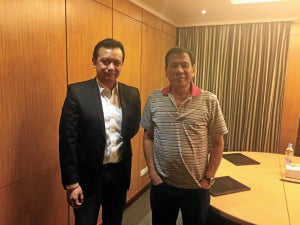 Duterte, who attended the presidential dialogue hosted by the Makati Business Club and the Management Association of the Philippines at the Peninsula Hotel in Makati on Wednesday, denied the existence of the bank account claimed by Senator Antonio Trillanes IV.

“Maniwala kayo (Believe me). That’s garbage. You can check with the bank. You go there,” said Duterte.

Responding to reporters’ questions, he said he signed a waiver for his bank accounts, but it did not cover the BPI account referred to by Trillanes.

“I signed a waiver, yes, but I will make it hard for Trillanes,” Duterte said. “What he showed was only papers.”

He said Trillanes must show proof to back his claim. “You (Trillanes) prove it. I will not make it easy for you. I will not play into your hands,” he said.

He then called the vice presidential candidate a liar.

“I told you, he is a liar. He fabricated this,” Duterte said.

Trillanes  earlier sought to be Duterte’s vice presidential running mate. Duterte, however, chose Senator Alan Peter Cayetano. Duterte said Trillanes has been on a mission to destroy him  because the mayor rejected the senator.

“This is election,” he said.