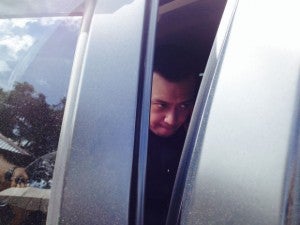 LIGAO CITY, Albay — Sen. Antonio Trillanes IV returned to this city in Albay province on Tuesday afternoon, to court the support of his town mates in his bid to become the country’s next vice president.

About 500 supporters gathered at the town plaza to hear Trillanes talk about the programs he would pursue to fight corruption in government and help in the country’s economic progress.

Speaking in the vernacular, Trillanes asked his townmates to vote for him on May 9. His appeal received cheers and applause.
“I’m am very thankful for the warm welcome of my fellow Ligaoeños. This is a sort of homecoming; I will not forget them once I get elected,” he said.

Trillanes, a member of the Nacionalista Party but who is running an independent campaign, believes his track record will help him in a field of six candidates for the second highest position in the country.

“Naipakita ko naman, tumitindig tayo sa mga panahon na walang gustong tumayo at itulak ang interes ng mamamayan, nandoon tayo lumalaban para sa ikakabuti ng ating mamamayan (I have shown that I would fight in times when no one would dare stand and fight for the interest of the people. We were there fighting for the interest of our people),” he said.