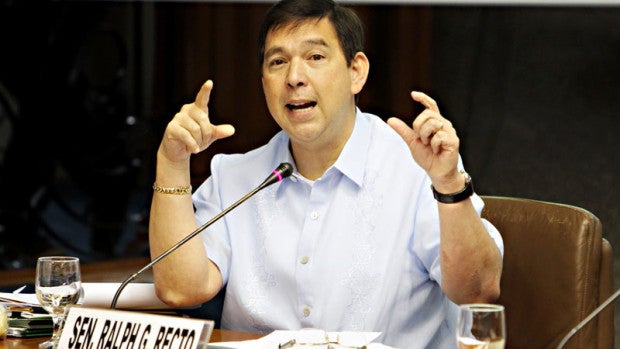 Wiping out the Abu Sayyaf should be the “Artikulo Uno” of the urgent things the next president should do, Senate President Pro Tempore Ralph Recto said on Tuesday.

“The next president should hit the ground running after this notorious group,” Recto said in a statement following the reported beheading of Canadian hostage John Ridsdel by members of the Abu Sayyaf Group (ASG).

“If he or she is drawing up a list of criminals who must be neutralized, then without doubt Abu Sayyaf occupies the number one spot.”

(The next president does not need to look for any other syndicate to neutralize. This abusive group has been volunteering itself.)

The senator described the ASG as the “most violent criminal syndicate” in the country today, saying that its “barbarity” has already made it among Asia’s most brutal groups.

The country, he said, has a “regional obligation to stamp them out and wipe clean this blot on our national image.”

“Abu Sayyaf’s victims are not just counted by the number of body bags, which are already in the hundreds since it began its bloody business a quarter-of-a-century ago,” Recto said.

“What must be tallied too are losses they have inflicted on our economy. Lands are idled by farmers too afraid to till, vacation plans are cancelled by tourists who are discouraged by bad publicity, investments are aborted,” he added.

The Armed Forces of the Philippines (AFP) has already promised “the full force of the law” to bring the ASG bandits to justice.

“There will be no let up in the determined efforts of the joint AFP-PNP (Philippine National Police) task group’s intensive military and law enforcement operations to neutralize these lawless elements and thwart further threats to peace and security,” the AFP said in a statement. RAM