Pacquiao slugs his way to No. 3 in senatorial poll 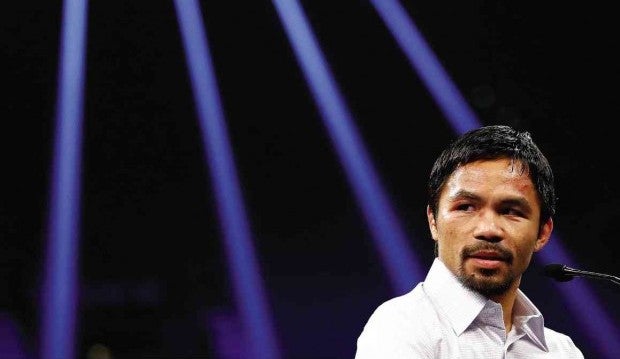 SARANGANI Rep. Manny Pacquiao, fresh from his demolition of American Timothy Bradley, has slugged his way up in the senatorial race.

The 37-year-old Pacquiao has moved up to third behind front-runners, Senators Franklin Drilon and Vicente Sotto III, according to the results of the latest Social Weather Stations (SWS) survey.

Of the 1,800 registered voters interviewed for the survey, 37 percent indicated preference for the Filipino boxing icon.

The survey was conducted from April 18 to 20, more than a week after Pacquiao scored a decisive unanimous decision over Bradley after dropping him twice in their April 9 fight in Las Vegas, Nevada. After the fight, he indicated retirement to serve the people.

The survey had a margin of error of plus-or-minus 2 percentage points.

In the previous March 30-April 2 SWS survey, Pacquiao ranked fifth to seventh with 31 percent, along with two other candidates.

In the latest survey, first published in BusinessWorld, Drilon held on to the top spot with 45 percent, followed by Sotto with 42 percent. In fourth place behind Pacquiao was former Sen.  Francis Pangilinan, with 36 percent.

Results of the survey also showed that 34 percent of the voters have a complete senatorial slate. Almi Ilagan-Atienza, Inquirer Research