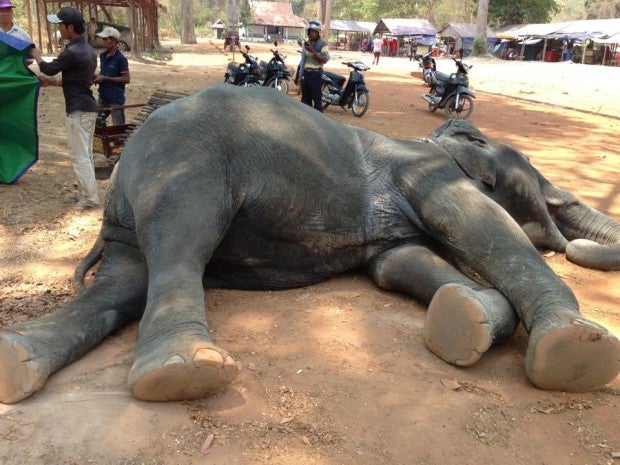 The Phnom Penh Post reported that the elephant, whose age was estimated at around 40-45 years, drew its last breath near Bakheng Mountain, shortly after ferrying two tourists to one of the archeological park’s temples.

It had been walking for about 40 minutes, said a spokesman from the Angkor Elephant company, who added that they were saddened by the loss.

The elephant had been working for the company since 2001.

“After our veterinarian checked…we concluded that she died of heart attack due to high temperatures and lack of wind,” the spokesman told the paper.

The temperature in Siem Reap reportedly hit a scorching 40 deg C on Friday.

Photos posted on Facebook by user Yem Senok, which showed the elephant lying on its side by the road, were shared over 8,000 times and sparked an outcry on social media.

A change.org petition was subsequently put up, calling for an end to elephant riding at the Angkor Wat.

It has since garnered over 12,000 signatures.

According to Mr Jack Highwood of the Cambodia-based conservation group Elephant Livelihood Initiative Environment, there are still 13 elephants working for the Angkor Elephant Company – the largest concentration of captive elephants in the country.