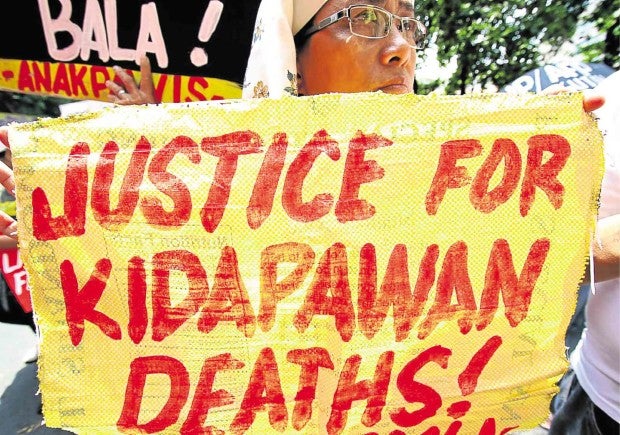 A poster demanding charges be filed against policemen who opened fire at the rally of farmers in Kidapawan City is displayed during a protest rally by militant groups at the Department of Justice. PHILIPPINE DAILY INQUIRER / RICHARD REYES

Charged with Sarmiento and Alcala before the Office of the Ombudsman in Mindanao were North Cotabato Gov. Emmylou Taliño-Mendoza, Kidapawan Mayor Joseph Evangelista, various local government officials and officers of the police and military.

For three months, the farmers asked the government for assistance but were ignored, prompting them to block a national road.

Two farmers were killed and more than 30 were hurt when police broke up their barricade. Over 75 other protesters– including minors, pregnant women and senior citizens–were arrested and criminally charged.

They are also facing a complaint for violations of Republic Act 9745 or the Anti-Torture Law, Republic Act 7438 or the Rights of Accused, Batas Pambansa 880 or the Public Assembly Act and Presidential Decree 1829 or the Law against Obstruction of Justice.

Complainants include Ebao, father of Darwin Sulang, one of those killed in the dispersal.

An independent autopsy showed Sulang sustained a gunshot wound on his forehead. Police claimed Sulang died of blunt force trauma to the head.

Other complainants are 17-year-old Victor Lumondang Jr. who sustained seven gunshot wounds; Arnel Takyawan who sustained a gunshot wound in the leg; Mark Anthony Delgado was also hit by a bullet in his leg and sustained other injuries after he was kicked and hit by truncheons; and Lumenario Agustin.

The complainants cited the testimonies of the police officers during the Senate investigation.

Based on the Senate inquiry, Taliño-Mendoza convened the North Cotabato Crisis Committee to deal with the protest. The committee was composed of Talino-Mendoza, Evangelista, Armilla, Tagum and Calinga. It was the committee which decided to disperse the protest and which crafted the plan to break it up.

According to the complaint, the plan for the dispersal and its implementation were carried out by Tagum, Evangelista and Calinga. However, before the actual implementation was carried out, they sought the guidance of Armilla, Badian and Nerez.

“This evidently shows the complicity and acquiescence not only of the provincial and regional officers but also of respondent Marquez,” the complainant, assisted by counsels from the National Union of Peoples’ Lawyers (NUPL) and Public Interest Law Center (PILC) stated.