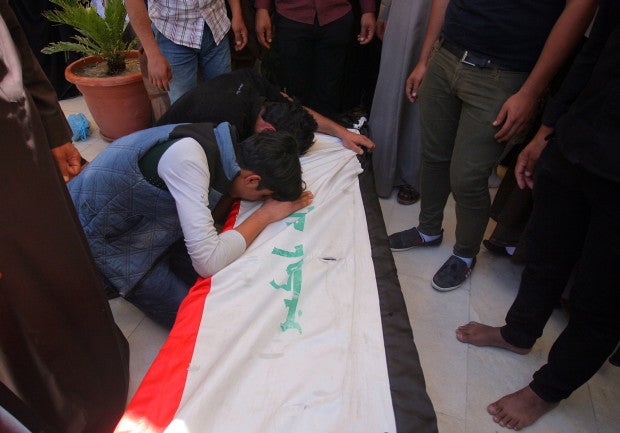 Iraqis mourn over the Iraqi flag-draped coffin of Saad Saleh Majeed, 42, who was killed in a suicide bombing on a checkpoint in Baghdad on Monday, during his funeral procession at the holy shrine of Imam Ali in Najaf, 100 miles south of Baghdad on April 4. Militants unleashed a wave of suicide attacks across Iraq on Monday, killing tens of people and wounding dozens, officials said. AP

A police officer said Sunday that a suicide car bomb struck a checkpoint in the eastern suburb of Hussainiyah late the night before, killing six civilians and four soldiers. He says 28 other people were wounded in the attack.

Another police officer says a suicide car bomb struck a passing military convoy at around the same time in the southern suburb of Arab Jabour, killing four soldiers and wounding eight others.

Two medical officials confirmed the casualty figures. All officials spoke on condition of anonymity as they were not authorized to release information.

No group has claimed responsibility for the attacks, which bore the hallmarks of Islamic State extremist group.