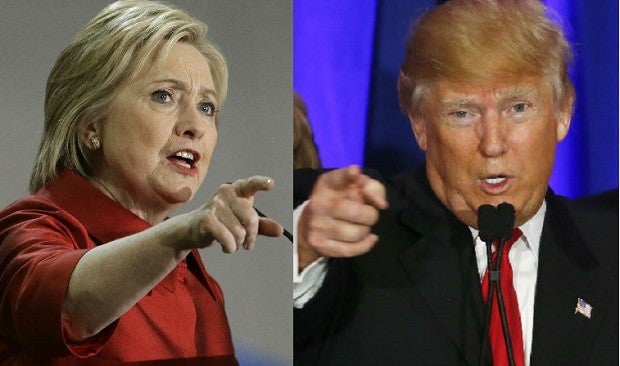 WASHINGTON, United States — US presidential frontrunners Hillary Clinton and Donald Trump seek to deliver knockout blows against their rivals in Tuesday’s five high-stakes primaries, with pressure mounting to wrap up the nomination races and pivot toward the general election battle.

Don’t expect the challengers to buckle just yet.

The extraordinary 2016 race has tested American political tradition, with the Democratic and Republican parties taking their nomination battles deep into primary season.

But the ex-secretary of state is poised to extend her delegate lead Tuesday when Connecticut, Delaware, Maryland, Pennsylvania and Rhode Island host their primaries.

Pressed Saturday on reports that she has begun her search for a runningmate, Clinton shook her head and replied: “I’m just working hard to win on Tuesday.”

Clinton leads in polling in the northeastern states, and if she sweeps all five Sanders will be hard pressed to exit the race.

In Pennsylvania, Clinton turned to the general election, knocking Trump and Republican candidate Ted Cruz and tailoring her message to working-class voters eager to see a return of manufacturing jobs.

“These are not jobs that can be exported, they have to be done right here in Pennsylvania,” Clinton told supporters this week in Philadelphia.

Politics professor Terry Madonna of Franklin and Marshall College in Pennsylvania said Sanders is “obstinate” about staying in the race, perhaps to earn a speaking spot at the Democratic convention in July.

Clinton “is the inevitable nominee now and the only question is at what point does she wrap up the magic number” of necessary delegates, Madonna told AFP.

A canopy of drama hangs over the Republican race, where the math points to a contested convention.

That means Trump will have to defy the odds with particularly strong showings through the remainder of the statewide contests if he is to win the nomination outright before the party’s delegates gather in Cleveland in July to pick their nominee.

Snatching most of the Republican delegates at stake April 26 would propel him that much closer to reaching the 1,237 delegates needed to nail down the nomination.

His campaign is increasingly on notice, however, that the provocative celebrity billionaire would need to surpass that number and not merely outperform rivals Cruz and Ohio Governor John Kasich.

“We aren’t going to hand the nomination to anyone with a plurality, no matter how close they are to 1,237,” Republican National Committee chair Reince Priebus told an influential gathering in Florida of more than 100 Republican delegates on Friday.

“You need a majority. Almost only counts in horseshoes and hand grenades,” he added in an apparent shot at Trump, who has derided the delegate system as “rigged” against him.

With the delegates huddling over whether to fight against a Trump nomination or ultimately embrace him, Priebus took aim at conservatives who have said they will not back Trump should he become the flagbearer.

“Politics is a team sport, and we can’t win unless we rally around whoever becomes our nominee,” said Priebus.

“The part he’s been playing, it is evolving into a part that now you’ve been expecting but he wasn’t ready for.”

Manafort wooing the very party establishment Trump has been railing against publicly could be seen as an effort to assure them that the demagoguery that made many Republicans wary of Trump was only a persona used to rally frustrated voters to his cause during the primaries.

Cruz had a blunt reaction to Trump’s evolution.

“Donald is telling us he’s lying to us,” he told CNN.

The arch-conservative senator is struggling to block Trump’s ascension.

“I do not believe Donald has any path to winning a majority,” Cruz told Dana Loesch’s radio show, repeating his assertion that “nobody” will secure 1,237 delegates before the convention’s first ballot.

Cruz says his aim now is to win the nomination on a subsequent ballot, when most delegates will be free to vote for someone other than the candidate they were originally bound to.

He also said he was now looking at Indiana, which votes May 3, as the next anti-Trump firewall.

Professor Madonna said Trump will likely end up between 25 and 100 delegates short of the threshold by the time the Republican primaries conclude on June 7, and that a fierce battle will ensue for the clutch of delegates who head to the convention unbound by any requirement to vote for a specific candidate.

“It’s going to come down to wheeling and dealing with 200 delegates,” he said.