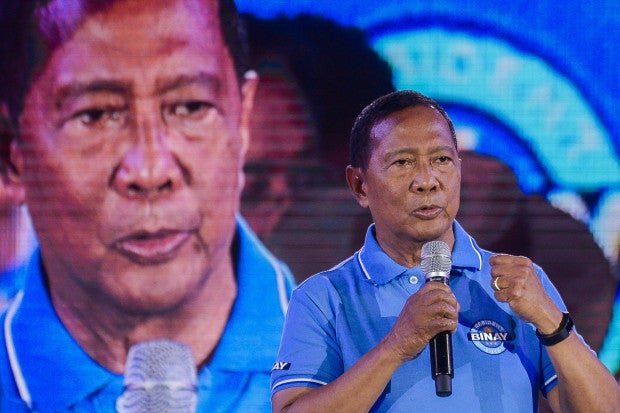 Vice President Jejomar Binay on Thursday said press freedom would be a priority in his administration as he urged the electorate not to vote for Mayor Rodrigo Duterte whom he tagged in the killing of journalists in Davao City.

In a statement, United Nationalist Alliance spokesperson Mon Ilagan said the media would be in graver danger under a Duterte presidency because of the mayor’s alleged links to the vigilante group Davao Death Squad.

Binay cited the names of journalists who were killed for exposing anomalies in Davao City under Duterte’s watch: broadcaster Juan “Jun” Pala, killed in September 2003; Rene Galope, killed in November 2004, and radioman Fernando “Ferdie” Lintuan, who was ambushed and shot dead on Christmas Eve in 2007 after exposing the alleged misuse of public funds in the construction of Davao Peoples’ Park.

Binay said Duterte had called the media “maiingay at madadaldal.”

“Our journalists are being attacked left and right. Will we put them in even more danger by choosing a leadership that will suppress press freedom?” Ilagan said.

“It is frightening to imagine the media under a leader who promises a bloody cleansing under his rule but only prey on the poor, the helpless, and those who dare to speak against him. He has admitted to being the Davao Death Squad—a glaring danger sign that the people must heed,” he added.

Ilagan said the Vice President earlier assured the National Press Club that he would resolve the cases of media killings in the country.

The spokesperson said Binay’s support for press freedom harked back to his experience as a human rights lawyer during martial law.

“We cannot have a president with blood on his hands. What we need is a leadership that will be unifying, will help the poor that are often suspected of crimes, and will protect our journalists.” he said.

Despite his vow of support for press freedom, Binay earlier filed a P200-million damage suit against the Philippine Daily Inquirer for publishing reports about allegations of kickbacks from overpriced deals in Makati City when he was mayor stashed in dummy bank accounts.

If he wins, Binay vows to create an independent commission to investigate Duterte’s alleged links to the Davao Death Squad.

The independent commission will be composed of former Supreme Court justices, human rights groups, the National Press Club, and the Commission on Human Rights. With Love Joyce Umbay