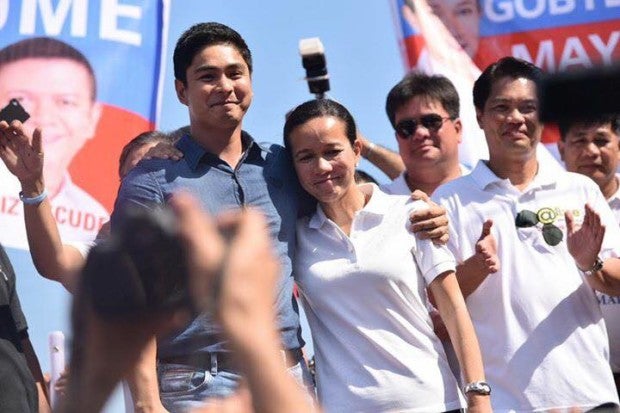 Actor Coco Martin joined presidential aspirant Grace Poe’s campaign for the first time in Bacolod on Thursday “without any compensation,” her spokesperson said.

From Bacolod, Poe will fly to Palawan later in the day for a rally with her running mate, Senator Francis “Chiz” Escudero, and their candidates for senator under Partido Galing at Puso.

Martin is also expected to join the tandem’s rally in the province.

Coco Martin is a co-star of Poe’s mother, Susan Roces, in the television series “Ang Probinsyano” aired nightly on ABS-CBN. “Ang Probinsyano” is  a remake of the movie which starred the senator’s late father, Fernando Poe Jr.

“Coco Martin is doing it without any compensation because he believes in what Senator Poe is fighting for — ending poverty and unemployment,” Poe’s spokesperson, Valenzuela Mayor Rex Gatchalian, said in a text message.

“Anybody, who wants to contribute to nation building, and anybody who believes in the advocacies of Senator Poe is welcome to join the campaign,” Gatchalian added.

“I am doing this for free…as a volunteer. Grace Poe is my President and when you believe in someone that much, no amount of money can match one’s beliefs,” the actor was quoted saying.