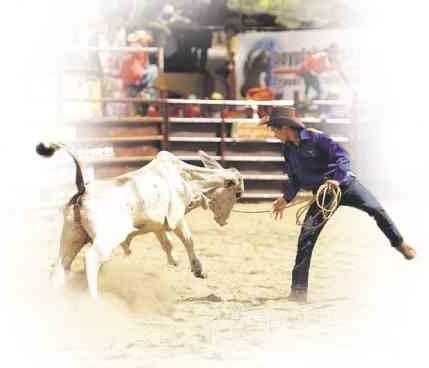 Like any rodeo event in other countries, the skills in cattle handling took center stage in the 2016 Rodeo Masbateño in the island province of Masbate. Its organizers, however, introduced an indigenous cattle event not practiced anywhere else in the world.

Leo Gozum, rodeo director and a member of the Rodeo Masbateño Inc. (RMI), is proud that only in Masbate province that a rodeo event, called carambola, does not use horses to handle and restrain cattle inside a corral.

“Carambola demonstrates a real-life situation in Masbate ranches where cowboys (or ranch hands) are ordered to tackle misbehaving cows with nothing but their bodies and reflexes,” Gozum said.

Kenneth Ramonal, the reigning Rodeo Masbateño King for the past five years, describes the peculiarity of the local rodeo as “raw, using a lot of brute force,” unlike the Western rodeo in which all events are performed on horseback.

Ramonal, a native of Libona town in Bukidnon province, has been joining the rodeo events here with his team from Mindanao since 1999. His team has been topping the events in the past five years.

“You are in a corral and the ranch boss orders, ‘Jump and catch them.’ You have to do it. It is about courage, anticipation and knowing the inherent characteristics of the animal and their movement,” Gozum said.

He said a skilled ranch hand knows when the cow moves forward or sideways and anticipate other movements to ensure that the animal would be safe when tackled.

Gozum laughed when he narrated how an Australian rancher, who watched last year’s rodeo, reacted to the carambola.

“Are you guys crazy? You are unbelievable! We don’t do it in Australia,” he quoted the Australian as telling them.

He said it is not about pitting the strength of the animal against a human because an ordinary man, naturally, cannot take down a 650-kilogram cow.

It is only by studying the animal’s movements and knowing its anatomy and weak points can a ranch hand safely restrain a cow, he said.

Gozum said rodeo is about mastering basic skills in handling cattle that include throwing and pulling the lasso, holding and restraining the animal, and tying and securing its legs before one can administer treatment or examine it.

Gozum said another unique feature of the local rodeo is its commemoration of the tradition of Masbate ranchers of transporting cattle from the ranches in the city’s outskirts to the port, with skilled cowboys guiding the herd. This event, called the “cattle drive,” was held on April 13 in the city’s main streets.

Judge Manuel Sese, president of RMI, said during the old days when ranchers were herding cattle to the local port, cowboys would stop the herd at the city boundary to warn business establishments along the way of the cattle drive passing through the capital’s streets.

He said the horseback-riding cowboys would shout, “Balance! Balance!” to keep the agitated cattle in line until the herd reached the port area where a cargo vessel was docked.

Gozum said 30 teams from different rodeo groups all over the country competed this year to earn trophies and cash prizes of more than P750,000.