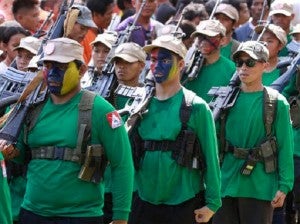 MANILA —  A soldier and a civilian auxiliary force member were killed on Monday, while they were on a mission to pursue suspected communist rebels who attacked an Army detachment and abducted five policemen in Davao City last Saturday.

The soldier and the paramilitary man were killed while two other soldiers were wounded in two clashes with an armed group in Sitio Banban, Barangay Lumiad, Paquibato district in Davao City. One member of the armed group had also been killed.

In a press briefing on Wednesday, Chief Supt. Wilben Mayor, the Philippine National Police spokesperson, said the same armed group could have abducted, also last Saturday, five Paquibato policemen who were on mobile patrol in Barangay Mapula in the same area.

Mayor cited a statement from Rigoberto Sanchez, spokesperson for the New People’s Army (NPA) Regional Operations Command Southern Mindanao Region, confirming that the NPA’s “1st Pulang Bagani Command” was responsible for theSaturday attack on the detachment, and the abduction of the police officers as “Prisoners of War.”

“The PNP denounces these lawless acts committed against the law enforcers. The Philippines is not at war, there is no declaration of war, nor is there any existence of conditions of war. Therefore, their continued detention is illegal under existing Philippine or any international laws. The police officers are civilians and not military personnel or combatants,” Mayor said.

Too, Mayor expressed alarm over reports that the abducted policemen have been tied to makeshift animal cages. “We are calling on the Commission on Human Rights (CHR) to investigate these reports. PNP officers are also human beings who have rights and deserve humane treatment and similar attention from the CHR,” the police spokesperson said.

Mayor added the abducted policemen were “dedicated and disciplined public servants who are well loved and respected in the community they serve.”

“Records will show that these police officers have no pending administrative or criminal cases and they have not violated any war crime or crimes against humanity. We, therefore, demand their immediate release,” Mayor said.

Meanwhile, Major Gen. Rafael Valencia, commander of the 10th ID under which operates the 84th IB, vowed to “relentlessly use legitimate force against the armed lawless groups and bring them before the bar of justice.”

Valencia has assured the public operations will continue “until [the groups] abandon the armed struggle and live peacefully and meaningfully with the rest of the Filipino people.”  SFM