Duterte supporters in a tiff over itinerary in Aklan 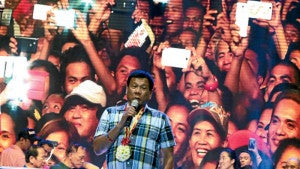 Davao City Mayor Rodrigo Duterte gets a warm reception from the crowd in one of his campaign sorties.
GRIG C. MONTEGRANDE

Members of the PDP Laban were expecting Duterte to speak at the Aklan Catholic College at the Roxas Avenue Extension after arriving at the Kalibo International Airport.

But a group of volunteers supporting the mayor has organized a separate rally at the Pastrana Park, the town’s public plaza.

The two venues are about 500 meters apart.

The two groups who were waiting for Duterte in front of the terminal since 1:45 p.m. argued over the itinerary of Duterte’s party.

Blas Carillo, spokesman of the PDP-Laban in Aklan, said Duterte was set to meet with Kalibo Bishop Jose Corazon Tala-oc.

“As far as we are concerned, we prefer that he holds his rally at the Aklan Catholic College but we cannot stop other groups with other activities. It is up to Mayor Duterte,” Carillo told the Philippine Daily Inquirer.

“There was tension … but someone told us not to enter (the area where Duterte was expected to exit from the tarmac)”he said.

Duterte had not arrived in Kalibo from Boracay Island as of 5 p.m.  SFM