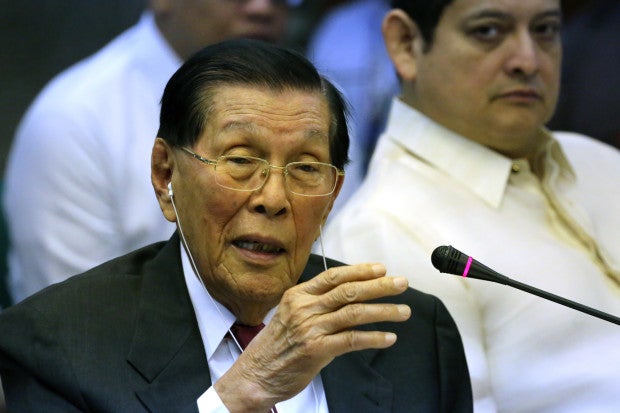 A relieved police official raised the possibility on Wednesday that the two victims in the violent dispersal of protesting farmers in Kidapawan City, North Cotabato last April 1 could have been killed by militants.

This came out while Senate Minority Leader Juan Ponce Enrile was questioning Senior Supt. Alexander Tagum during the ongoing investigation of the Senate committee on justice on the incident.

Tagum, who has been relieved as North Cotabato provincial director after the incident, reiterated that he did not give any order to his men to fire on the protesters.

“Sir, I did not give any order to fire,” he said, responding to Enrile’s queries.

“That’s the trouble with this government, all investigation and nothing’s happening. It’s time you shape up,” Enrile said.

“Why did you use your firearm to fire [on] the people directly? Even under martial law, we never did that, to fire [on] your people. It’s a doctrine in the military that you can’t fire [on] civilians.”

However, Tagum insisted that he did not order his men to fire on the protesters.

“How come there are two dead by gunfire?” Enrile said.

“Sir, that’s according to the militant group, Sir,” Tagum said.

“You’re saying that the militants were the ones who killed their own people?” the senator asked again.

The two men killed in the incident were identified as Darwin Sulang, a 22-year-old farmer, and bystander Enrico Fabilgar, 30. RAM

Read Next
Prince William rejects criticism he is ‘work shy’
EDITORS' PICK
PH study shows 1 in 4 COVID patients at risk for stroke
Print media group seeks tax breaks
Work-From-Home is here to stay and requires reliable logistics
SC asked to compel gov’t action vs plastic pollution
Legarda emphasizes role of ICC/IPs in nation building this IP month
Climate Change Commission and Nestlé PH to discover sustainability-focused solutions
MOST READ
Drivers now required to take driver’s education upon license renewal – LTO
Gordon to Duterte: You? Teaching me courtesy?
Can Marcos Jr. be disqualified?
Marcos Jr’s ‘special diploma’ from Oxford: You can have it, too
Don't miss out on the latest news and information.