US Supreme Court swears in a dozen deaf lawyers 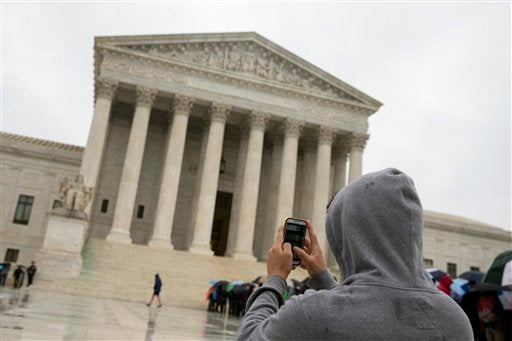 This April 29, 2014 file photo shows a Supreme Court visitor using his cellphone to take a photo of the court in Washington. AP

WASHINGTON, United States — The US Supreme Court is notoriously anachronistic when it comes to new technology. But in a rare move, it allowed several smartphones and tablets in the courtroom Tuesday to swear in a dozen deaf and hard of hearing attorneys.

Chief Justice John Roberts used American Sign Language instead of English for the first time to admit the largest group of deaf and hard of hearing attorneys to the Supreme Court Bar.

The 12 members of the Deaf and Hard of Hearing Bar Association (DHHBA) participated in the swearing-in ceremony with the help of sign-language interpreters and a real-time transcript delivered via a restricted wi-fi signal to their electronic devices.

The use of electronic devices is usually strictly banned during sessions in the cavernous marble courtroom that can seat around 400 people.

Roberts signed “your motion is granted” to indicate the attorneys were admitted, a phrase he learned especially for the ceremony, Supreme Court spokeswoman Kathy Arberg said.

“It was amazing to be part of the swearing-in ceremony today,” DHHBA president Anat Maytal told AFP, saying the move marked “tremendous progress.”

“It was very thoughtful for Justice Roberts to acknowledge the Deaf and Hard of Hearing Bar Association the way he did.”

“The real-time captioning was very helpful to ensure we were able to follow the arguments with everyone else in the courtroom,” Maytal said.

“This event helps potential employers see that deaf and hard of hearing lawyers are just as qualified and can be just as successful.”

A deaf lawyer has argued a case before the Supreme Court only once, in 1982 — and lost.

“While the number of Supreme Court Bar members that actually get to argue is very low, that’s no reason why a deaf or hard of hearing member can’t make that exclusive list one day soon,” Maytal said.

“Many already argue in the lower federal and state courts, after all.”

A Supreme Court Bar admission allows attorneys to argue cases before the top court. They must be sponsored by two current members of the Bar and be attorneys in good standing for at least three years.

Read Next
Magnitude 5 quake rattles Davao early Wednesday
EDITORS' PICK
Look Through: The fate of impounded stray dogs
House energy committee chair Arroyo bats for cheap electricity
What to watch out for when selecting a video surveillance solution
23,000 cops to be deployed nationwide for school reopening
Unleash the photographer in you this World Photography Day with vivo smartphones
DOH says COVID-19 cases plateauing, but public shouldn’t be ‘complacent’
MOST READ
Korina Sanchez reunites with former ABS-CBN co-anchors Julius Babao, Cheryl Cosim
Sharon Cuneta asks for prayers for friend in ICU who suffered silent stroke
QC school’s shutdown violated rules – CHEd
Light therapy could be the answer to your sleep problems
Don't miss out on the latest news and information.