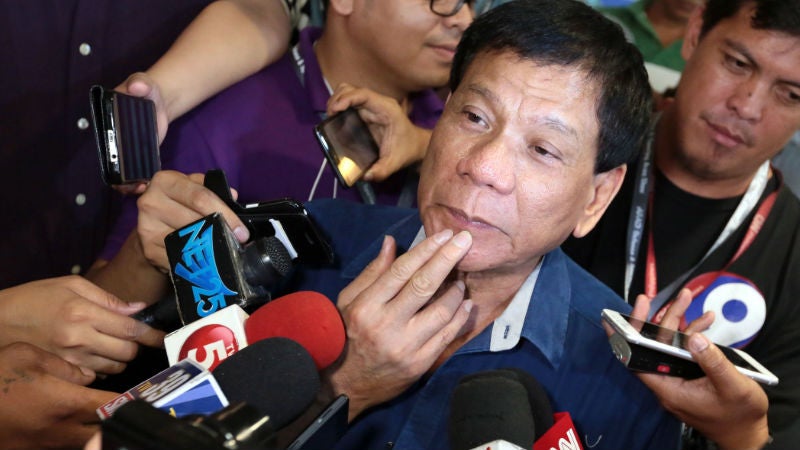 DAVAO City Mayor Rodrigo Duterte has increased his lead over his rivals in the presidential race, enjoying wide margins in all socioeconomic classes and capturing Metro Manila and Mindanao, results of a nationwide survey conducted on April 5-10 showed.

Duterte was ahead of his nearest rival by 18 points in the upper and middle classes, and by an almost insurmountable 42 points in his bailiwick, Mindanao.

But a political scientist said a fraction of the mayor’s supporters might consider another candidate in the wake of his joke about an Australian missionary who was raped in a hostage crisis in 1989.

Seven percentage points separated Duterte from Sen. Grace Poe, according to the Pulse Asia survey. Duterte got a preference rating of 32 percent, up by 2 points from 30 percent the previous week.

The rating of Poe was unchanged at 25 percent, while Vice President Jejomar Binay and administration candidate Mar Roxas were still tied in third place.

Binay got 20 percent, steady from the previous poll, while Roxas received 18 percent, down by a point. Sen. Miriam Defensor-Santiago got 1 percent. (See tables on this page.)

Anything but status quo

Richard Javad Heydarian, a political science assistant professor at De La Salle University, said Duterte’s lead in  the polls reflected the  people’s preference, which is anything but the status quo.

“It can also be called grievance politics or protest votes,” Heydarian said in a phone interview.

The survey, commissioned by ABS-CBN, was conducted before a video of Duterte joking about the rape of a Australian missionary circulated online.

In the video uploaded on YouTube on Sunday but has been taken down since, Duterte was recalling a 1989 hostage-taking incident in a detention cell in Davao City that left 21 dead, including visiting lay worker Jacqueline Hamill, who had been raped by the inmates.

“Son of a bitch, what a waste. I was thinking that they raped her and lined up. I was angry because she was raped. That’s one thing. But she was so beautiful. The mayor should have been first. What a waste,” he said, eliciting laughs from the crowd.

In 1989, Duterte was serving his first of seven terms as mayor of Davao City.

Duterte’s comments drew outrage from his rivals and the public.

Heydarian, nevertheless, expected Duterte’s “uber-loyal” supporters to stay with the mayor because they don’t care what their candidate says.

But those who are not “uber-loyal,” especially women, may consider the second option, Poe, the political science teacher said.

Four in 10 voters of Duterte picked Poe as their second choice, the Pulse Asia survey showed. 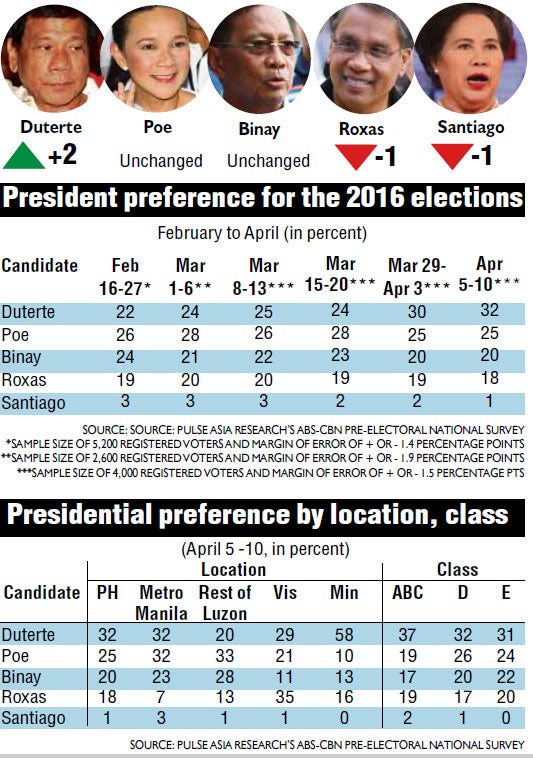 “Poe is in a great position to gain back the momentum. This is still competitive but given the limited time and the numbers, this is Poe’s opportunity,” Heydarian said.

Edmund Tayao, a political science professor at University of Santo Tomas, said voters’ sentiments toward Duterte’s latest remark could go either way considering the mayor is one of the most unpredictable candidates.

Tayao said any of the three Ms in a political campaign—money, machinery and mistake—“can radically bring up or down the numbers of a candidate.”

Roxas got  strong support in the Visayas with 35 percent but Duterte is catching up with 29 percent. (See tables on this page.)

Despite what it called Duterte’s “whopping 7-percentage point” lead over Poe, his camp said it would continue to reach out to voters.

“We need to convert and convince others that the path to real change is through the unparalleled and decisive leadership that Mayor Duterte has been providing us,” said Duterte’s national campaign manager, Leoncio Evasco Jr.

Poe said she respected the survey results and that she would use these in her national campaign.

“I believe that on Election Day, the voters will choose a leader who is propeople and brilliant for the good of the country,” Poe said.

Although its candidates continue to lag in the surveys, the ruling Liberal Party (LP) is sticking with standard-bearer Roxas and running mate Leni Robredo.

Speaker Feliciano Belmonte Jr., LP vice chair, said there would be no major shift in alliances among party members up to the last minute.

Malacañang was undaunted by the latest voter preference survey, saying the race for both the presidency and vice presidency remains closely fought and highly competitive.

“We are confident that in the run-up to Election Day, the Daang Matuwid (Straight Path) coalition will continue to garner support as our bosses manifest their desire for continuity of good governance that is the basis for the attainment of inclusive growth,” Presidential Communications Secretary Herminio Coloma Jr. said.

In Marawi City where he was campaigning, Binay shrugged off the latest Pulse Asia survey showing him still in third place.

Asked to comment on his standing in the survey, Binay replied by telling a reporter that the latter had accompanied him in his sorties. “You can see (the situation) in the field,” he said.

Asked whether he expected to win the most votes in Mindanao where he was campaigning for several days, Binay said he was certain he and Marawi City Mayor Fahad Salic, who is running for governor of Lanao del Sur province, would win in May.

Binay’s campaign spokesperson, Rico Quicho, said the standard-bearer of the United Nationalist Alliance maintained that the real survey was the results of Election Day.

He said the Binay camp would step up campaign sorties because “direct campaigning and talking to our people will further strengthen our core group.”

“And that will help and give us votes for us to win the election,” he said. With reports from  Nikko Dizon and Nancy C. Carvajal