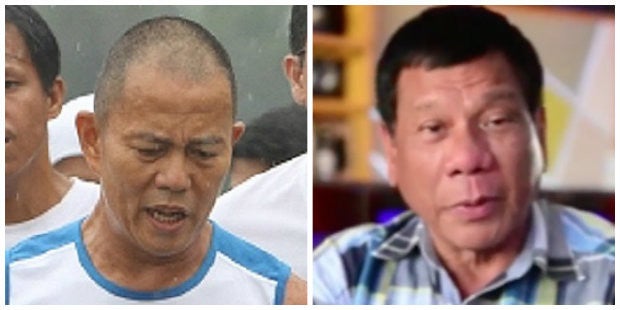 LUCENA CITY, Quezon — Activist-priest Robert Reyes said no “sane leader” should joke about rape, especially if the victim was dead.

Reyes, the so-called running priest for staging runs to promote causes, appealed to all candidates in this year’s elections “to recognize and respect the sanctity and dignity of all human persons by showing this in thought word and deed.”

Reyes said the controversial statement by presidential candidate and Davao City Mayor Rodrigo Duterte on the rape and slaying of an Australian missionary during a hostage-taking incident at a prison in Davao in 1989 was bordering on necrophilia.

“I call that necrophilia … It is morbid,” Reyes said in a text message to the Inquirer. “No sane leader would use rape as a subject of a joke. Women are to be loved and respected,” he added.

Reyes said no person should be reduced to becoming objects of jokes and ridicule.

“Jesus said, ‘Whoever looks at a woman lustfully commits adultery against her.’ In like manner, speaking sexually about any woman, especially a dead one, achieves the same result,” he said.

In a video clip posted on YouTube, Duterte, in a speech during a campaign rally in Quezon City recently, remarked that after viewing the body of the slain Australian hostage, Jacqueline Hamill, he expressed regret over the incident and insinuated that he could have been given the first crack at the missionary, who he described as “beautiful, as if she were an actress.”

When asked if Duterte could still be considered a credible presidential candidate after his controversial rape joke, Bishop Bernardino Cortes, head of the Prelature of Infanta in Quezon, quoted Pope Francis and said: “Who am I to judge?”

“Duterte’s behavior, even in the past, does not improve the already bad image of the Philippines. But he reveals the misfortune of our country of having no real respectable [moral] leader,” Arguelles said in a text message to the Philippine Daily Inquirer on Tuesday.

But Arguelles said he would be advising voters not to vote for any of the presidential candidates at all.

“I am advising them [to choose] none of the above,” he said.

In Oriental Mindoro province, Calapan Bishop Warlito Cajandig said Duterte’s style was “unacceptable… especially since he is aspiring to become the president of the republic.”
“We also have conventions and standards. The masses though have a different standard,” said Cajandig.

When asked if he thought this would affect Duterte’s chances of winning, Cajandig said the it might cost Duterte votes, especially from the undecided voters.

In a recent interview, Reyes said he and a group of religious leaders might revive Gomburza, a militant organization of activist priests, nuns, brothers and laity, to oppose the presidential bid of Duterte.

“With the country’s current political direction, we will be forced to resurrect Gomburza to participate once more in the struggle for justice and freedom for the Filipino people,” said Reyes, the former head of Gomburza.

If people would elect Duterte as the next President, Reyes has this piece of advice: “Don’t entertain the illusion that Duterte will really solve the country’s problem on criminality and corruption.”

“There’s no magic pill to cure the systemic ills of the country in a matter of six months. Yes, it is an attractive campaign pitch. But what’s the trade off? That’s the danger. We should all be wary,” he said.

Reyes said Gomburza, coined from the names of priests Mariano Gomez, Jose Burgos and Jacinto Zamora who were executed by the Spaniards in 1872, has been in “hibernation” since the mid-2000s after some leaders of the Catholic Church castigated the group’s militant activism that oftentimes contradicted the political views of some church officials.

Fr. Raul Enriquez, former secretary general and spokesman of Gomburza, said Duterte could not solve the country’s problem on criminality, graft and corruption “through unlawful means” or “[by] just shooting criminals and grafters.”

Reyes said Duterte’s surge in the surveys was a result of the desperation of Filipinos.

“These are all protest votes against ‘yellow politics’ and the bungled promises of the [Aquino] administration under the failed ‘daang matuwid’ policy of governance in favor of the elite, giant businesses and big landlords to the detriment of the poor,” Reyes said. SFM