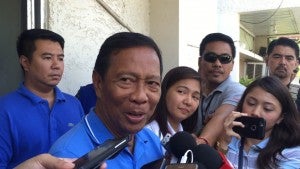 “I believe that Binay will win. Just wait and see,” Emano said.

Emano has been a long-time friend of Davao City Mayor and presidential candidate Rodrigo Duterte but Emano said he would not leave Binay.  Duterte is in a statistical tie with Sen. Grace Poe for the lead in the latest Social Weather Station (SWS) popularity survey on presidential candidates.

Binay arrived in the city Sunday to attend the UNA rally Monday afternoon. In the morning, he and other UNA candidates went around the city. He also visited the residence of Archbishop Antonio Ledesma.

Emano’s own party Padayon Pilipino has coalesced with UNA. In the past it had aligned with the Pwersa ng Masang Pilipino, the party of former president and  Manila Mayor Joseph Estrada.  SFM