A VIDEO CLIP of Davao City Mayor Rodrigo Duterte making a joke about an Australian lay missionary who was raped during a 1989 hostage crisis in his city has stirred outrage among his rivals.

The furor over his remarks prompted Duterte, the front-runner in the presidential race, to say sorry for his gutter language.

“That’s gutter language. That is how men speak,” he told reporters in Davao City Sunday. “I am sorry that others were offended.”

The rape of a woman “is not a joking matter; this is barbarity,” said Liberal Party (LP) standard-bearer Mar Roxas, who has frequently tangled with Duterte over the mayor’s sexist remarks in the course of the election season.

“Women have rights; they are not playthings,” the former interior secretary said of his rival’s remarks in the video, which began circulating online, quickly turning viral, over the weekend.

Malacañang joined in the outrage, saying Duterte’s statement showed the mayor “has not matured nor evolved, and that his offer to serve as President truly deserves scrutiny.”

Duterte’s brash and brutally frank speaking style has won him plenty of would-be voters, pushing him to the top of the polls with less than a month to go before the elections.

He was the leader in the latest voter preference polls conducted by Pulse Asia and Social Weather Stations, closely followed by erstwhile front-runner Poe. Trailing behind them were Roxas and Binay.

In the clip, Duterte, who was onstage during a campaign rally, appeared to be referencing the August 1989 hostage drama at the Davao police detention cell, when one of the hostages, Australian lay missionary Jacqueline Hamill, 36, was raped by the inmates.

The inmates, after grabbing their guards’ weapons, seized  Hamill and 14 other church workers who were holding a Bible service in the prison, according to news reports.

The two-day hostage drama ended after government forces stormed the prison cell, killing all 15 hostage-takers. Hamill, whose neck was slashed, and four other hostages died.

“All the women there were raped in the first assault and they retreated, but the bodies the attackers used remained there, one of which was the body of an Australian lay minister. Tsk, this is a problem … . The body was brought outside and it was covered. I looked at her face, son of a b****…  she looked like a beautiful actress in the United States,” Duterte said.

“Son of a b****, what a waste. I was thinking that they raped her and lined up. I was angry because she was raped, that’s one thing. But she was so beautiful, the mayor should have been first, what a waste,” he added, eliciting laughs from the crowd.

Calling Duterte a “crazy maniac,” Binay said rape and murder of a woman were no laughing matters.

“You are a crazy maniac who doesn’t respect women and doesn’t deserve to be President,” said the Vice President, who had been urging people not to vote for Duterte for killing innocent people. 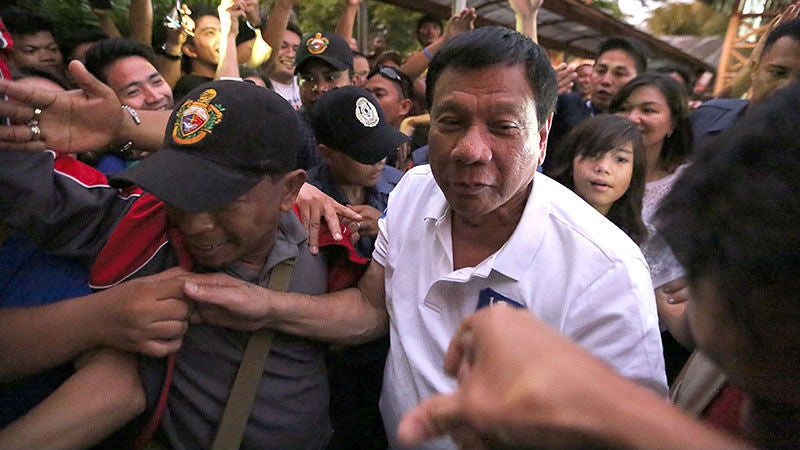 For her part, Poe said she took offense at Duterte’s remarks, calling these “distasteful and unacceptable, and reflects his disrespect for women.”

“No one, whoever she is and whatever her looks may be, deserves to be raped and abused. Rape is a crime and no laughing matter. We should all be outraged at abuses against women,” she said in a statement.

“While some may seem impressed with the mayor’s nonchalance and tough-talking stance, he should be reminded that at all times, women, men and the LGBT alike should be treated with dignity and respect,” she added.

Roxas said the joke showed how unfit the tough-talking mayor was to be the country’s President.

LP vice presidential candidate Leni Robredo said she was appalled by Duterte’s remarks as a human rights lawyer who had witnessed women’s struggles against violence.

“It is not right to make jokes about rape,” said Robredo, a mother of three daughters and widow of Interior Secretary Jesse Robredo. “We shall set a bad example to the youth if we poke fun at a crime that’s as heinous as rape.”

She said someone who was aspiring to be the country’s leader had no business making jokes about rape. “Public servants need to set an example to the people.”

“His frequent use of women, regardless of their circumstance, as subject or object of his jokes during his presidential sorties is foul and offensive, to say the least. It is a distasteful attempt to woo voters at the expense of women and by demeaning the dignity of women,” Escudero said in a statement.

“We should, at all times, protect and respect the dignity of women and other genders. We do not want the Philippines to become a haven for women and sex offenders,” he said.

In a statement, Presidential Communications Secretary Herminio Coloma Jr. said Duterte had “made fun of and trivialized” the “rape and killing” of Hamill.

“Indeed, he has confirmed by word and deed why those who oppose his candidacy have expressed utmost concern about the lack of fitness for the presidency,” Coloma said.

After saying sorry for his language, Duterte repeated to reporters what he told the crowd at the Amoranto Sports Complex in Quezon City on April 12: “Oh, this one is very beautiful, who looked like an actress. Son of a b****, they did it to her. The mayor should have been first. ‘Kill them all.’”

He said it was not a joke when he said it. “Do not make me apologize for something which I did. It’s a matter of honor. I said it in the heat of anger.”

Although he would not apologize to anyone in particular, Duterte  said he was sorry to the Filipino people. “It’s my style, it’s my mouth. I said it in the heat of anger.”

But listen to the story behind it, he said.

The story that Duterte was referring to was the hostage-taking of three foreign missionaries inside the jail in Davao Metrodiscom headquarters in 1989.

The main suspect, Federico Pugoy, had earlier held a bus and was convinced by Duterte to release the hostages in exchange for the mayor himself.

Duterte said he was the one who ordered the hostage-takers killed and as a result was investigated by a congressional committee. With a report from Nestor Corrales, Inquirer.Net