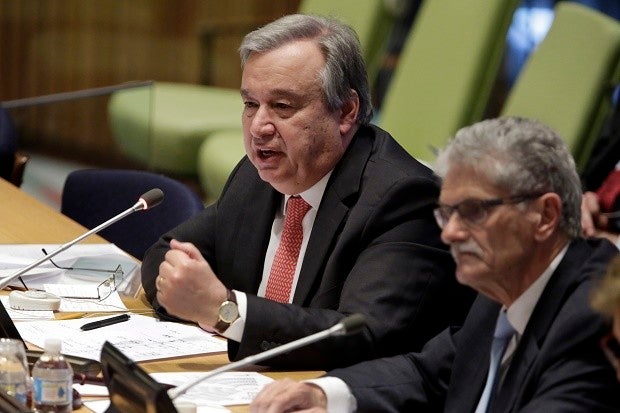 U.N. Secretary General candidate Antonio Guterres, left, the former United Nations High Commissioner for Refugees, answers ambassadors’ questions as U.N. General Assembly President Mogens Lykketoft, of Denmark, listens in the United Nations Trusteeship Council Chamber, Tuesday, April 12, 2016. For the first time in the 70-year history of the United Nations, all the member states will get a chance to question the candidates for Secretary-General, in a move to make the usually secret selection process for the world’s top diplomatic post more transparent. AP

UNITED NATIONS — Nine candidates seeking to become the world’s top diplomat answered a total of about 800 questions over the past three days from ambassadors and advocacy groups in the first move in the UN’s 70-year history to open up the usually secret selection of the next secretary-general.

General Assembly President Mogens Lykketoft, who presided over the question-and-answer sessions, said he was “very inspired” that in addition to almost all 193 UN member states taking part, 227,000 people from 209 countries and territories watched part of the webcast.

“It has already made a difference,” he told reporters late Thursday. “We have established a new standard of transparency and inclusivity for the selection of the secretary-general.”

The UN chief is chosen by the General Assembly on the recommendation of the 15-member Security Council.