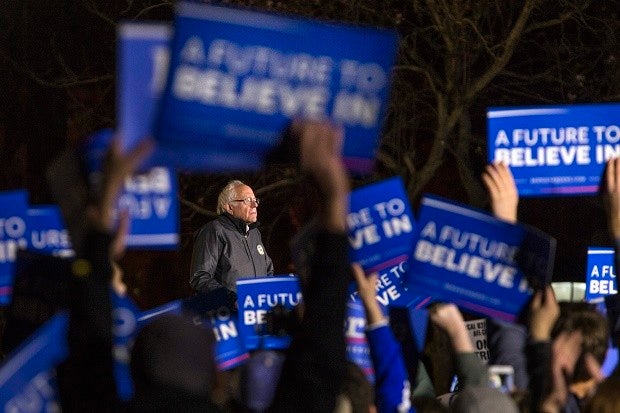 Sanders cited front-runner Clinton’s support for the unpopular Iraq war and for free trade agreements, as well as her willingness to accept money through a super political action committee, as evidence that she lacks the needed judgment. Still, he backed away from previous statements questioning her qualifications, saying the former secretary of state does have the “experience and intelligence” to be president.

Clinton made little effort to hide her irritation with Sanders’ challenging of her qualifications, saying that while she has been “called a lot of things in my life, that was a first.” She also cast Sanders as unprepared to implement even his signature policy proposals, including breaking up big Wall Street banks.

“I think you need to have the judgment on day one to be commander in chief,” she said.

Clinton has accumulated 1,289 pledged delegates from primaries and caucuses while Sanders has 1,038. Her lead grows significantly when the superdelegates are added in: 1,758 for Clinton and 1,069 for Sanders.

READ: Why Sanders keeps winning but may not be Democratic nominee

It takes 2,383 to clinch the Democratic nomination. Sanders would need to win 68 percent of the remaining delegates and uncommitted superdelegates to reach that figure.

The debate was the first for the Democratic candidates in five weeks ahead of Tuesday’s high-stakes contest and its huge cache of delegates at stake.

For Clinton, a win in her adopted home state would blunt Sanders’ recent momentum and put his pursuit of the nomination farther out of reach. A Sanders upset over Clinton would shake up the race, raising fresh concerns about her candidacy and breathing new life into the Vermont senator’s campaign.

Sanders has won a string of recent primary contests, including a big victory earlier this month in Wisconsin. But because Democrats award their delegates proportionally, he’s struggled to cut into the lead Clinton took earlier in the voting. He’s also failed to persuade superdelegates — the party insiders who can back the candidate of their choice regardless of how their states vote — to switch their loyalties from Clinton.

Despite his long mathematical odds, Sanders has vowed to stay in the race through the party’s convention in July. Backed by legions of loyal supporters, he’s amassed impressive fundraising totals that give him the financial wherewithal to do just that.