Seoul says N. Korea launch of a missile appears to have failed 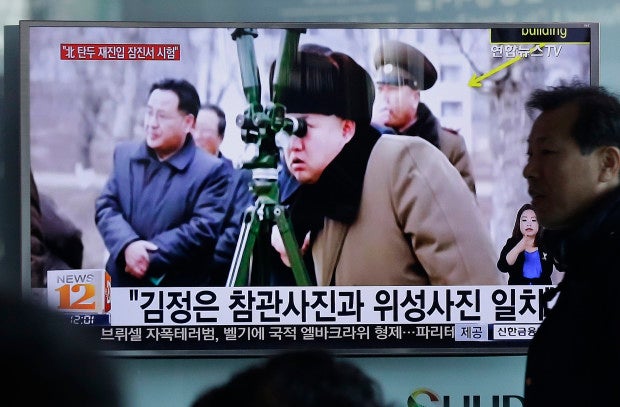 A man passes by a TV screen showing North Korean leader Kim Jong Un during a news program at Seoul Railway Station in Seoul, South Korea, Thursday, March 24, 2016. North Korea said Thursday that it had successfully conducted a solid-fuel rocket engine test, which if confirmed would be a major step forward in boosting its missile attack capability against South Korea and the United States. The Korean letters on the screen read: “Kim Jong Un watches a solid-fueled rocket engine test.” AP FILE PHOTO

SEOUL, South Korea — A North Korean launch of a missile on the birthday of its revered founder appears to have failed, South Korea’s Defense Ministry said Friday.

The ministry provided few details of the launch, which comes as the two Koreas trade threats amid Pyongyang’s anger over annual South Korean-US military drills that North Korea calls a rehearsal for an invasion.

Leader Kim Jong Un is also preparing for a major ruling party meeting next month that analysts believe he will use to further solidify his autocratic rule.

The North has fired a slew of missiles and artillery shells into the sea in an apparent protest against the drills.

The Defense Ministry said it wasn’t immediately known whether the missile fired Friday morning was a short-range or mid-range missile.

The North’s launch came amid speculation in the South that its rival was preparing to test a medium-range missile with a range of 3,500 kilometers (2,180 miles) — enough to reach US military installments in Japan and Guam. Foreign experts have nicknamed the missile “Musudan” after the village in the northeast where North Korea has a Launchpad.

Friday is the birthday anniversary of Kim Il Sung, the current leader’s grandfather and the nation’s founder. North Korea has occasionally used such celebrations to stage nuclear or missile tests that outsiders consider provocations.